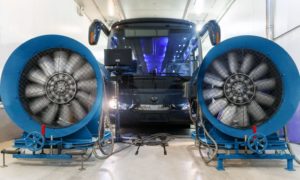 Under the scheme, qualifying vehicles are eligible to receive a 30 pence per kilometre incentive payment.

To earn ULEB status, a vehicle must deliver a 30% well-to-wheel saving in greenhouse gas emissions when compared to an equivalent Euro VI diesel bus.

In the UK, Yutong is represented by Castleford-based importer Pelican Bus and Coach.

Ian Downie, Head of Yutong Bus UK, said, “Pelican is extremely proud to be the first ever, and only, Coach recipient of the ULEB certificate.

“The introduction of zero emission vehicles in Scotland will play a vital part in reducing emissions from public transport.

“The forward-thinking support from the Scottish Government with the BSOG LEV scheme provides a real incentive for operators to look at the benefits of zero emission vehicles.”

Dan Hayes, Project Manager at LowCVP (Low Carbon Vehicle Partnership) said, “The LowCVP Bus Working Group has been critical in developing the certification schemes for incentives such as the £48m Ultra-Low Emission Bus Scheme which funded over 270 electric buses and infrastructure in England and Wales in 2019.”

He added, “LowCVP has also supported the development of the BSOG LEV incentive in Scotland which now offers 30 pence/kilometre for the operation of an ‘effectively zero emission bus’. As many bus routes in Scotland are operated by coaches, this incentive extends to coaches which can meet the same performance as effectively zero emission buses. The Yutong ICE 12 is hopefully the first of many zero emission coaches that demonstrate comparable performance to buses and further support the shift of the UK vehicle parc to a net-zero operation.”