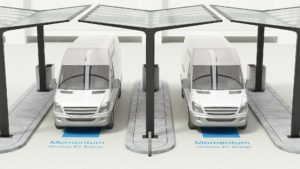 A major new research project to explore the benefits of wireless charging for electric commercial vehicles as been given the greenlight and, according to the leading academic at the helm, it could hold the key to realising a fully autonomous future.

The project, led by Heriot-Watt University, Flexible Power Systems (FPS) and City of Edinburgh Council, has been awarded £1.6 million in funding to take an in-depth look at all the issues surrounding the charging of electric LCVs and HGVs using wireless pads.

According to project lead Professor Phil Greening, co-director of the Centre for Sustainable Road Freight based at Heriot-Watt University, the use of the technology and not needing a person to physically plug-in a vehicle could be crucial in paving the way for driverless deliveries.

Instead of being manually connected to an electricity supply, wireless charging would enable vehicles to power-up while loading and unloading, as well as when parked.

The project, which also involves Edinburgh City Council and Flexible Power Systems (FPS), will also explore the feasibility and potential of shared micro logistics hubs where fulfilment functions can be combined with charging.

Initially, according to Professor Greening, these hubs could be used by individual logistics businesses when transferring, for example, loads from a small electric van to a last-mile cargo bike. Eventually though, he envisages hubs being shared between multiple businesses, reducing cost and limiting pressure on the electricity grid.

It is believed that the application of wireless charging technology would improve vehicle turnaround times and staff productivity at the hubs, enhancing cost savings.

Ultimately, the project’s main aim is to accelerate the transition to EV in commercial vehicle fleets by reducing the cost of charging the vans.

Professor Greening explained the project will increase knowledge about how electric vehicles can be converted to wireless charging, demonstrate how easy these wirelessly charged vehicles are to operate and expose the technology, and practices and identify aids that may be needed.

It will also provide operational experience and an understanding of the technology’s resilience as well as testing the concept of micro-fulfilment, with a small number of vehicles, operating with a limited number of chargers and sharing those.”

The project will involve the building of the UK’s first wireless charging hub for light commercial vehicles, which will be installed at Heriot Watt University’s Edinburgh campus in early 2021, to service specially adapted vans from both City of Edinburgh Council and Heriot-Watt’s estates team. The technology has already been proven for mass transit applications and will be supplied by specialist firm Momentum Dynamics.

But according to Professor Greening, the potential goes far further.

“It’s inevitable that in the future we’ll see autonomous vehicles, and in the commercial vehicle world, I think that’s quite likely to come sooner rather than later.

Autonomous vehicles offer a wealth of opportunities for making logistics more efficient, by extending operating windows, for instance. If you have an autonomous electric vehicle which satisfies the commercial need and the environmental imperative, then it’s going to have to find a way of charging without a person being present. That’s where wireless comes in.”

He added, “Within the next 10 years we will see pilot autonomous vehicles being deployed using wireless charging hubs.

“Autonomous vehicles will come and there are huge amounts of investment being made to develop the technology. It may not come in passenger vehicles as quickly because there’s all sorts of behavioural things to overcome but the commercial world is quite rational and if it’s an opportunity then it will find a place.”