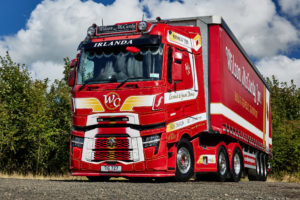 Ballymena-based Wilson McCurdy Jnr Haulage has added its first ever Renault truck to its fleet, citing new model updates and exceptional customer service as key to its decision.

Behind this is Renault Trucks’s Optidriver AT 2612F gearbox with automatic clutch. Optional extras include Alcoa Dura-Bright aluminium wheels, roof-mounted twin air horns and the cab is finished in red with matching bumper corners, centre and steps.

It joins the Wilson McCurdy Jnr fleet of seven on general haulage with regular runs out of Cork, Limerick and Kerry then on across Ireland and the UK.

Before the purchase, the haulier contacted Diamond Trucks in Mallusk and arranged to try a T480 demo which performed very well.

“We were impressed by the team at Diamond Trucks, and their down-to-earth approach and having only had a two-year warranty with another manufacturer, the comprehensive four year repair and maintenance contract from Renault Trucks sealed the deal.”