UK Automotive productivity up 208% since 1999, as industry highlights 20 years of sustainability gains.1
Two decades of energy savings enough to power 9.5 million UK households, while water saved equals 810 litres for every person in the UK.2
CO2 per vehicle produced more than halved, while new car CO2 has declined by a third.
Auto manufacturing workers among UK’s better earners, with average salary 40% higher than the national average.3
SMMT sets out key requirements to support a sustainable UK motor industry, including a frictionless trading relationship with the EU.

The progress of UK Automotive in sustainable development is revealed today by new data published the Society of Motor Manufacturers and Traders (SMMT). The 20th annual Sustainability Report reveals environmental, economic, and social gains achieved by the sector over the past two decades, highlighting the substantial improvements in areas such as energy and water use, waste to landfill and CO2 emissions. 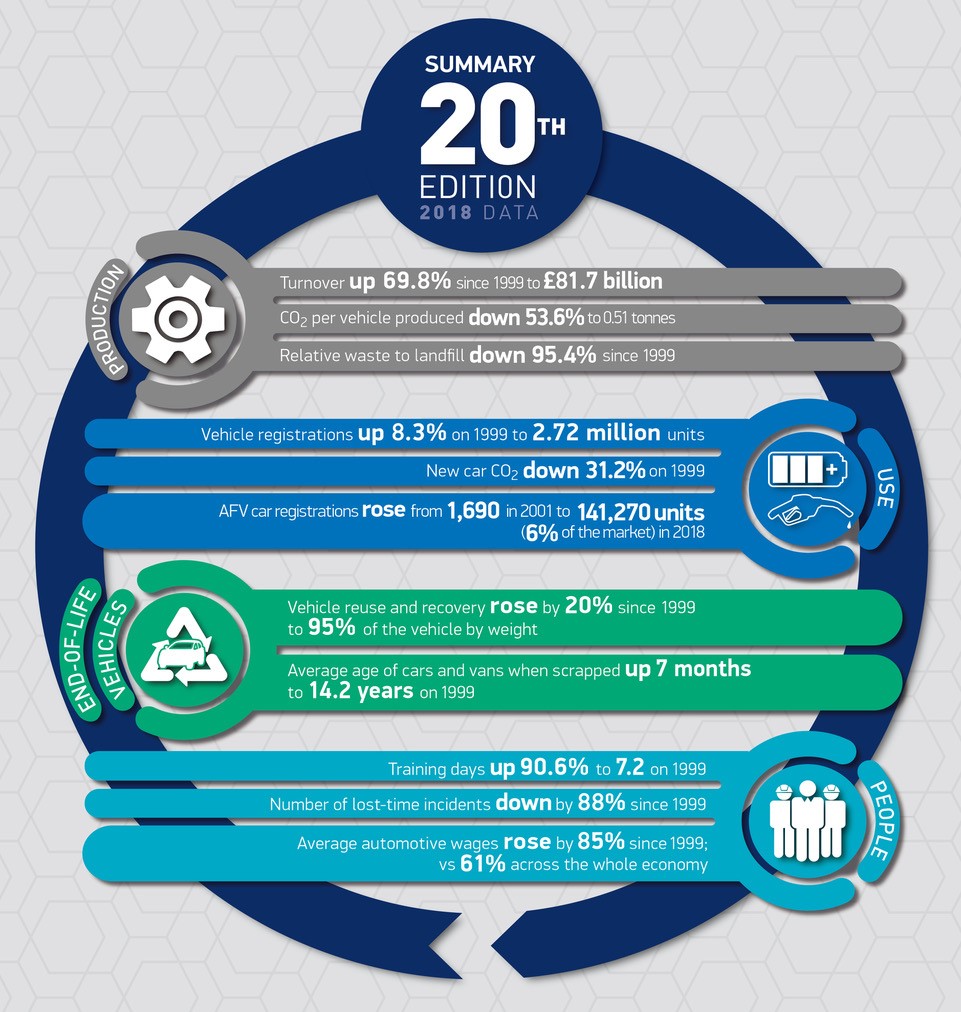 Over the past 20 years, automotive manufacturing has grown to become one of the UK’s most important economic assets, turning over £82 billion in 2018 – an uplift of 70% since the first Sustainability Report was published in 1999. At the same time, workers have experienced a significant wage boost, with average automotive wages have risen by 85% over the period compared with 61% across wider manufacturing. Automotive manufacturing workers are now some of the UK’s better earners, with an average salary of £41,800, 40% higher than the national average. Meanwhile, productivity has increased considerably, with automotive output per a job growing by 208% from £32,000 to £100,900. The value of exports has also grown significantly, with 81.5% of cars produced in 2018 destined for international markets compared with 63.9% in 1999.

However, this remarkable progress has not been at the expense of environmental performance. The UK automotive sector is now one of the most efficient in Europe, outperforming the EU average for energy, CO2 and water. Thanks to strict efficiency targets and continuous improvement and refinement of manufacturing processes, the sector has significantly reduced its environmental impact. Between 1999 and 2018, energy savings add up to power for 9.5 million homes for a year, while the CO2 saved would fill the Royal Albert Hall 37 times.4 Recycling is also high on industry’s agenda, with manufacturers having saved 693,969 tonnes of waste from landfill, equal to the annual waste produced by households in Bristol, Leeds and Edinburgh combined.5 Meanwhile, the amount of water saved is equivalent to 813 litres of water for every in the UK.

These substantial advancements have been driven by massive investment in new models and plants. Brexit remains the biggest threat to the future competitiveness of UK Automotive. The country’s future relationship with the EU must deliver frictionless trade, assure our competitiveness and create an environment ready for investment. This is vital for not only future economic growth, but to further improve the sector’s sustainable development.

Sustainability lies at the heart of the UK automotive sector and manufacturers are committed to balancing profitability and output with social and environmental responsibilities. Industry has invested heavily in ever safer, more efficient technology, but in processes and measures that have significantly reduced its environmental impact.

We are on the cusp of a transport revolution and this sector has the potential to be one of the world’s leading forces driving the change. For the UK to reap the full benefits, any future relationship with the EU must assure our competitiveness, delivering frictionless trade and a supportive business environment to encourage investment.

Alongside advances in production processes, Industry has continued to invest heavily in developing the latest low-emission technology to address air quality and environmental concerns. Efforts to deliver ever more efficient cars have resulted in average new car CO2 falling 31.2% since 1999, while Nitrogen oxides (NOx) emissions have been cut by 84% since the turn of the millennium and exhaust particulate matter virtually eliminated.
Key priorities for a sustainable UK Automotive sector 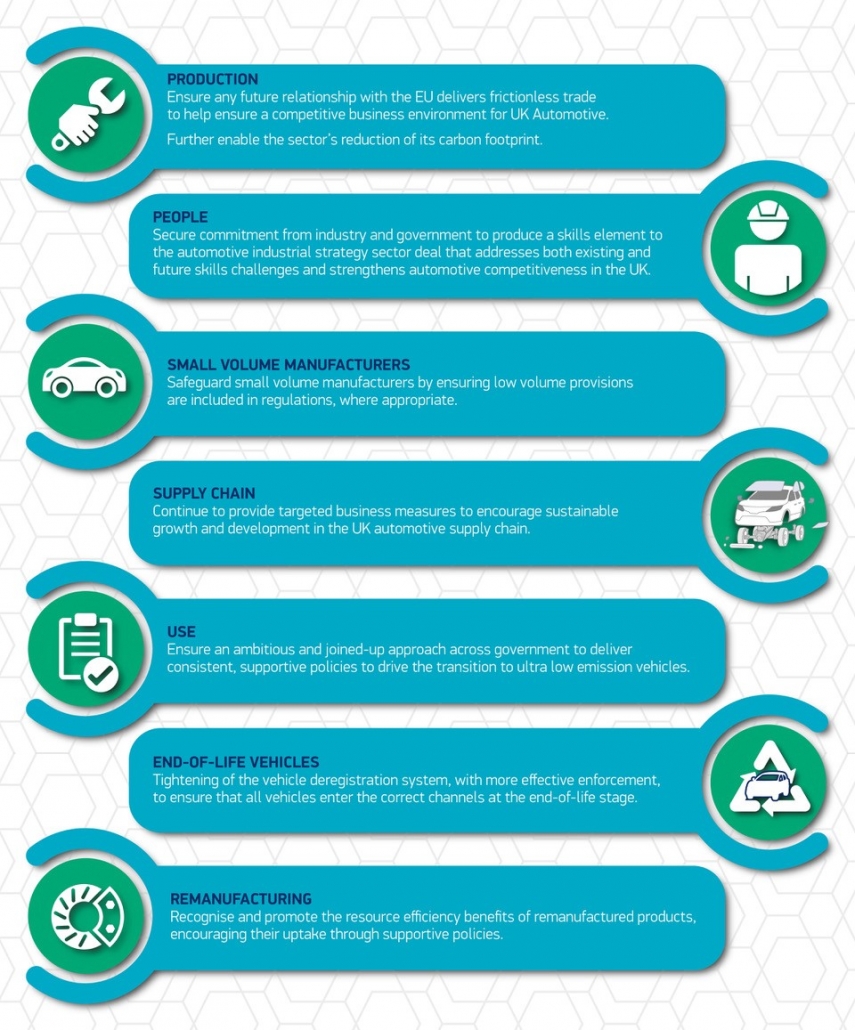