Electric and hydrogen truck pioneer Tevva has launched a hydrogen fuel cell-supported HGV to be manufactured, designed and mass produced in the UK. 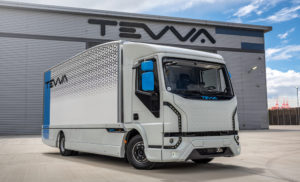 The Tilbury-headquartered scale-up’s 7.5-tonne hydrogen electric truck, which has a fuel cell system provided by Loop Energy, has a range of up to 310 miles.

Refuelling typically takes about five to 20 minutes, a similar time to that of a diesel truck.

The hydrogen fuel cell system tops up the battery, extending the vehicle’s range and allowing the truck to carry heavier loads over longer distances.

One advantage of fuel cells as a range extender, rather than the primary source of power, is that it allows the use of smaller, cheaper and lighter fuel cells and to operate these at the highest possible efficiency.

Alongside its 24/7 customer support, Tevva will offer hydrogen services to customers, providing safe and convenient access to sustainable and affordable hydrogen supplies.

Tevva has so far raised £115m in funding for the project and the truck will be available in the UK, Europe and eventually North America.

Asher Bennett, Founder and Chief Executive at Tevva, said: “We are excited to launch our hydrogen electric HGV, creating a landmark moment for Tevva and UK manufacturing.

“We firmly believe that the post-fossil fuel future, which is quickly approaching, will see a new range of technologies and fuels take centre stage in the transport industry.

“By embracing hydrogen, we are futureproofing ourselves, our clients and the industries and communities they operate in.”