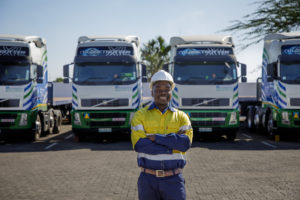 International development organisation Transaid has been a key part of the road transport sector for many years, working with communities, partners, and governments to improve road safety and access to health care across sub-Saharan Africa.

The charity, founded by Save the Children, The Chartered Institute of Logistics and Transport (CILT), and its Patron, HRH The Princess Royal, raises funds through its corporate membership scheme that has helped to develop its longstanding HGV and PSV driver training programmes in African countries.

Transaid is strongly backed by the wider transport industry and counts on the support and expertise of influential and leading industry figures, recently announcing the appointment of former Traffic Commissioner for Scotland, Joan Aitken, as chair of its board of trustees.

Ms Aitken was first introduced to Transaid at an industry event where the organisation was the beneficiary charity. Following conversations with the senior team, she got on her bike in 2017 to cycle with a charity team of 40 riders in the Cycle South Africa fundraiser and collectively raise more than £200,000.

“Transaid is the most incredible organisation and has earned a very special place in my heart,” said Ms Aitken.

“I’ve been privileged to have visited two projects in Zambia, one focused on access to healthcare and the other on road safety; plus, I contributed to the driver training activities in Uganda, which cemented my understanding of Transaid’s life-saving work.”

In Mozambique, there are currently no standardised training materials for driving schools and other training providers, and training is largely aimed at fast acquisition of driving permits – rather than imparting high quality skills.

As a result, many professional drivers do not undergo structured and comprehensive practical and theoretical training, instead largely depending on peer-to-peer or self-learning methods.

However, earlier this year, Transaid began a programme in that country to train a minimum of 10 driving instructors from four to five training schools, for them to then deliver training to at least 400 existing HGV drivers within small and medium-size enterprises.

This project, scheduled to be completed by July 2023, is part of an initiative led by GIZ Employment and Skills for Development in Africa, funded by the German government with support from the Norwegian government, Appload and EnergyWorks.

“HGV driver training is currently limited in Mozambique, and it raises concerns that drivers are not sufficiently trained for the demanding roles they undertake,” said Neil Rettie, Road Safety Project Manager at Transaid.

“We are confident our proven ‘train the trainer’ model will help to deliver a sustainable change to driver training standards in Mozambique, just as it’s already doing in countries including Tanzania, Uganda and Zambia.”

Uganda is currently experiencing a huge rise in demand for professional drivers and Transaid is part of a new initiative, the Professional Driver Training – Uganda (PDTU) project, to increase the number of female HGV and PSV drivers in the East African country. 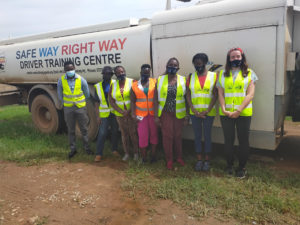 Transaid and local non-governmental organisation Safe Way Right Way have been tasked with training 750 drivers within PDTU between April 2021 and April 2023, of which at least 25 should be female.

This target has already been exceeded, with more than 40 female drivers having already completed the training.

Transaid has reviewed course training materials to ensure they are appropriate to female and male drivers, working with trainers to ensure that their training styles are inclusive and adding new content on the importance of respect in the workplace.

The organisation has also reached out to local firms to promote the benefits of hiring female drivers and held workshops with prospective employers.

The development of a team of Master Trainers, whose job is to train new trainers and ensure that knowledge is retained locally, is key to the success of the PDTU project.

“We know from research that female drivers are statistically safer on the road and take less risks than their male counterparts; plus, some examples show a reduction in fuel theft,” Mr Rettie said.

“Yet the challenge we often face is companies wanting to take on drivers with experience; and suddenly we’re not only encouraging them to take on their first ever female driver, but also someone who is new to the sector.”

The opportunity to participate in secondment programmes is one of the many benefits open to Transaid corporate members such as GXO.

Tessa Wilson, a Graduate Management Trainee at GXO UK and Ireland, recently began a six-month secondment as a project officer for the second phase of the PDTU project.

The appointment has seen Wilson swap her previous placement at a GXO facility in Kent for Kampala’s tropical climate, working closely with the Safe Way Right Way Driver Training Centre, as well as local truck and bus fleet operators.

“This is one of the biggest challenges I’ve taken on and I’m really enjoying the opportunity to work in such a different environment,” she said.

“I’m only a few weeks in, but I’ve already learnt new skills and it is wonderful to be contributing to such a hugely important project.”

Earlier this year, international freight management group Xpediator, renewed its corporate membership of Transaid for a further three years, having originally signed a three-year commitment in 2019.

The business, which specialises in freight forwarding, logistics, warehousing and transport support services, says its support for the international development organisation is a key part of its corporate social responsibility pledge. 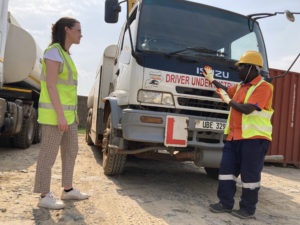 Dave Gladen, Group Marketing Manager at Xpediator, said: “Once we’d been introduced to Transaid and had learned more about the projects they were involved with, coming on board as a corporate member was the natural next step.

“Knowing that our support for Transaid is directly helping to transform lives across Africa means a huge amount to us.

“It’s something we actively talk about with both our teams and our customers; we’re very proud to be supporting Transaid’s life-saving work.”

For more information about how you can support the organisation as a corporate member or take part in fundraising events visit . https://www.transaid.org/.