Last summer saw the HGV driving shortage crisis hit the headlines, with a Road Haulage Association survey estimating a shortfall of more than 100,000 qualified HGV drivers in the UK.

Aware of the significant fall in driver numbers, transport businesses have spent the last few months beefing up their driver training to help those wanting to change careers. 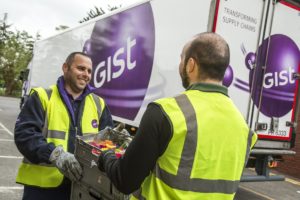 For example, Gist has expanded its driving academy so that prospective HGV drivers with no previous experience can now train up.

The firm’s in-house instructors and examiners will support applicants through the programme and could see candidates gain a Category C or C+E licence in seven to 14 days.

Its driving academy was launched last October at its training and testing centre in Spalding, Lincolnshire.

Initially it concentrated on training existing Category C and provisional HGV licence holders, but the scheme has now been expanded to anyone with a full UK driving licence and at least two years’ experience.

Applicants who gain their Category C+E licence receive competitive pay and Gist will fund all training costs and fees linked to obtaining the licence, as well as travel and accommodation costs, in a package expected to save candidates up to £5,000.

It believes the academy will deliver up to 100 newly qualified HGV drivers for the company every year.

Julian Bailey, Managing Director, Temperature Controlled Logistics at Gist, said: “The logistics industry is still tackling a nationwide HGV driver shortage and so I’m thrilled that our in-house academy is playing a vital role in addressing that.”

In Mid Wales, parcel deliver company Speed Welshpool has invested more than £10,000 into the launch of an academy.

Working in partnership with Dulson HGV Training in nearby Shrewsbury, the programme has trained six drivers so far.

George Edwards, Managing Director at Speed Welshpool, said: “It’s well-known there’s a shortage in the industry, and that’s why we need to do all we can to help recruit and retain drivers.

“Our scheme provides free on-the-job training for experienced candidates which otherwise could be regarded as cost prohibitive.”

North Yorkshire’s Reed Boardall is also bringing a new generation of professional drivers into the industry via its Driver Academy launched last autumn.

Since the inception of the academy, the cold storage and distribution services provider has successfully qualified 14 drivers.

The Boroughbridge-based company is now offering a number of courses to help people enter the sector and is supporting the up-front costs of training. No previous experience is required, and candidates only need to have a full UK driving licence.

Ross Morris, Health and Safety, Training and Development Manager at Reed Boardall, said: “Increasingly, people are wanting to move into different sectors and try different jobs, often later in life, but many have been put off becoming an HGV driver because of the high cost of the training and the test fees. 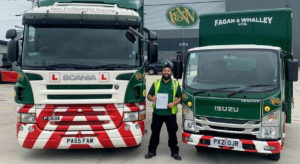 “We’re keen to attract as much new talent to the industry as we can, from all ages and backgrounds, including younger people and women who may not have considered this career previously.”

Training begins with one of two 3.5-tonne Isuzu Grafter N35.125(S) rigids with curtain-sider bodies before candidates progress to 12-tonne, 18-tonne, and 44-tonne vehicles.

The Grafter has all the attributes of a truck without the trainees needing to have the formal qualifications to drive it and is used to teach new applicants about load security, ratchet strapping, tail lift procedures and loading and unloading from curtain-sider bodies.

Prospective drivers can also experience the difference between an over-engine cab and a vehicle with a bonnet.

Dean Moss was the first driver to qualify through the Future-bound scheme, described by F&W as a “structured driver training programme.”

“Dean joined the programme with a background in warehousing management and a qualification to drive forklift trucks, but he didn’t have much van work under his belt,” said Gareth Jones, F&W Trainer.

“When we announced the launch of our Future-bound Scheme, he decided to go for it, and just eleven weeks later, he’s successfully passed his Cat C Class 2 test and is ready to move onto driving a larger vehicle.

“His goal is ultimately to pass his Class 1 and become one of our long-distance HGV drivers.”

Amid the increasing number of HGV vacancies last year, Fuel distributor WCF Chandlers, based in Grantham, decided to start a Driver Academy with a 13-month apprenticeship, giving non-HGV drivers a chance to earn the required qualifications for a career within the tanker driving industry. 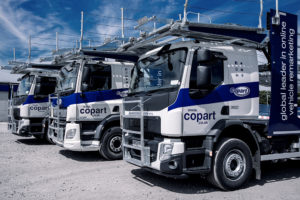 The scheme aims to deliver 100 new fully trained drivers in the first year.

Currently, Copart has more than 250 directly employed specialist drivers and 18 bases strategically located throughout the UK.

The HGVC-managed programme offers a network of more than 400 UK learning centres to ensure drivers stay connected to the most suitable training locations.

It is managed through a centralised system, which provides Copart with a wealth of live information on the training and progress of its drivers, as well the ability to source prospective candidates.

Phil Briggs, Director of Operation Centres, Transport and Engineering at Copart, said: “The Copart Driver Academy programme represents a significant investment into our transport and logistics capabilities and will enable us to select candidates who demonstrate the right attributes to join, and train within, our business without the usual qualification restraints.”

These exciting new driver academy initiatives should help to bring new people into the HGV driver market and support the continued growth of UK transport and logistics firms.