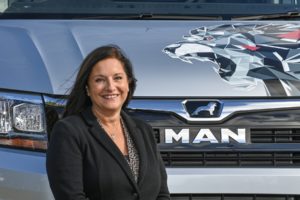 Perry has extensive experience in the automotive industry within both network and OEM, having led teams in retail sales, SME and corporate sales.

She succeeds Daniel Holbein who is leaving Man Truck & Bus UK to take up a new position in the manufacturer’s headquarters in Munich.

In 2007 she joined FCA Fiat Professional and in 2015 she joined the Volkswagen Group as National Fleet Sales Manager, Volkswagen Commercial Vehicles UK.

Perry said: “I’m really looking forward to joining such a successful team and be given the opportunity to head up MAN Truck & Bus UK’s van division.

“As a vehicle manufacturer, with van products spanning the 3.0 to 5.5 tonne categories, MAN have a compelling range of award winning, robust and cost effective vehicles and since the launch of the MAN TGE here in the UK, in 2017, I’ve witnessed the range appeal to more and more customers, both family owned businesses and larger blue chip Public Limited companies.

Stefan Thyssen, Managing Director of MAN Truck & Bus UK added: “Her wealth of experience within the automotive sector and knowledge of the commercial vehicle industry will prove a huge asset to the company.”