The road to zero: how food and drink hauliers are decarbonising their operations 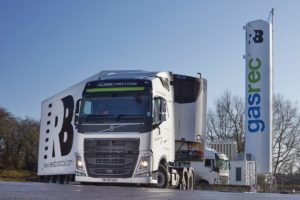 Over the past few years, transport companies in the food and drink sector have been working on a series of measures to decarbonise their operations.

The issue has received extra impetus in recent weeks with the publication of the government’s decarbonisation plan which recommends a ban on new petrol and diesel truck sales by 2040.

Frozen food distribution business Reed Boardall has been one of the firms at the forefront, opening its first Bio-LNG refuelling station as it looks to transition its 220-strong fleet away from diesel.

Owned and operated by Gasrec, the fully scalable station at the firm’s headquarters in Boroughbridge can fuel an initial fleet of 30 Volvo FH LNG 6×2 tractor units which can return CO2 savings as high as 95%, plus deliver a 99% reduction in particulate matter and 90% in NO2 emissions compared to equivalent Euro-6 diesel trucks.

Its LNG trucks offer a range of 470 to 480 miles per tank, comfortably enough for return journeys delivering frozen foods to regional distribution centres around north and central England without needing to stop and refuel.

The next step is for a further station to be installed in Scotland later in the year.

“We’re working closely with the team at Gasrec and that collaborative approach will help us to expand our LNG fleet over time as the infrastructure allows.”

Gregory Distribution has also installed a refuelling station, owned and operated by Gasrec, at its Cullompton depot, to fuel its trucks.

Paul Jefferson, Group Legal, Risk and Sustainability Director at Gregory Distribution said the transition to alternative fuels is a key part of the firm’s long-term strategy and this new facility is a continuation on that journey.

He added: “We put our first LNG trucks on the road last September and the reduction in carbon emissions have been clear to see.

“There is a growing expectation from our customers to support them in their sustainability strategy and objectives. Running our fleet on these more environmentally-friendly fuels is a key part of this. 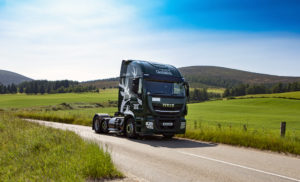 “Right now, for our long-distance trunking work, Bio-LNG is the best option to help reduce our carbon footprint.”

Engineers at distiller William Grant & Sons, Glenfiddich, have come up with a new way to use the by-products of its distilling process, while minimising the carbon output of its operations.

By loading waste matter from the distillery into an anaerobic digester, the company can capture the biogas given off as it breaks down.

It is also planning to make the technology available across the whisky industry in Scotland to support the decarbonisation of transport, in line with UK and Scottish Government’s net zero targets.

William Grant & Sons’ Dufftown Site Leader, Kirsty Dagnan said: “It has taken more than a decade for Glenfiddich to become the first distillery to process 100% of its waste residues on its own site.

Temperature controlled operators have also moved towards the adoption of more efficient refrigeration units as part of their decarbonisation plans.

The 13.6 metre electric trailer is being used for store deliveries of fresh and chilled foods to well-known UK supermarkets.

This new technology uses an under-mounted battery to power the fridge system and, when driving, converts kinetic energy generated by the trailers’ axle to replenish the battery pack and in turn power the refrigeration unit.

Unlike current refrigeration systems, this loop creates a fully autonomous system that produces no direct carbon dioxide or particulate emissions.

Mick Pethard, Head of Engineering, Gist, said: “We are always keen to trial new technologies and this is an exciting new product for us to explore.

“We’ve partnered Carrier refrigeration for a number of years to help us on our journey to improve fuel efficiency and Gist’s sustainability.” 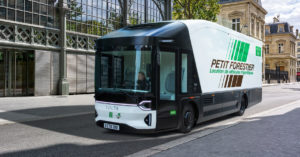 Tesco has put 30 new fully electric LDV refrigerated vans for its home delivery fleet into operation in Greater London, equipped with electric E-200 units from Thermo King as part of its broader strategy to reach net-zero emissions for UK operations by 2035.

The supermarket chain has committed to electrifying its home delivery fleet by 2028 and the says the new vans will help gather feedback ahead of a wider roll-out.

For indirect emissions from the supply chain, Tesco is also targeting a 35% reduction by 2030.

In addition, to support the wider adoption of electric vehicles, Tesco is also installing 2,400 charging points for customers across 600 of its stores.

Meanwhile, Volta Trucks has announced plans to develop an all-electric refrigerated truck based on its Zero model.

A total of 1,000 Volta Zeros with refrigerated bodies are due to be sold to rental firm Petit Forestier Group in 2022.

Léonard Forestier, Chief Executive Officer of the Petit Forestier Group, said: “This partnership embodies our desire to significantly increase our pace in terms of innovation and energy transition of our fleet.

“We are taking action now to prepare for the future and to provide our customers with the best zero emission refrigeration solutions, designed for their urban deliveries.”