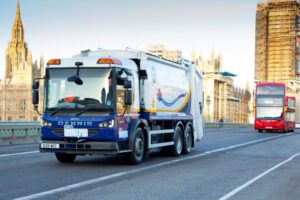 A solution exists that helps reduce municipal fleet emissions without simply scrapping older diesel vehicles. Projects in the north and south east England have upcycled diesel refuse vehicles, extending the life of existing assets through the fitment of electrified powertrains. Complementary technologies and initiatives can even help to create closed-loop recycling and feed renewable power back into the local grid.

Westminster City Council recently showcased one of its upcycled electric refuse collection vehicles (eRCVs) on a parade for the SMMT’s Electrified 2021 event. The 26-tonne eRCV is operated by Veolia and is nearing the end of its trial with the council, which declared a climate emergency ahead of pledging to become a carbon neutral council by 2030 and a carbon neutral city by 2040.

Veolia Westminster general manager, Julie Angulo explained that, “We’ve been trialling two of these vehicles in Westminster for over a year and a half, as another step forward towards electrifying the fleet. Working in partnership with Westminster City Council, this project highlights once more our joint ongoing commitments, to create a greener and more sustainable city and to support the improvement of air quality by lowering emissions and avoiding pollution.” 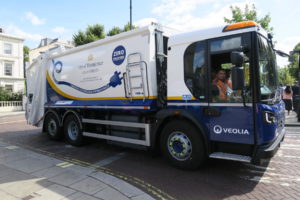 EV driveline specialist Magtec has completed conversion works for Greenwich, and Sheffield, where the City Council claims that its upcycled eRCVs can – due to the city’s Energy Recovery Facility – be powered by the waste they collect. The upcycling project is part of an Innovate UK-backed £2.6 million national scheme to accelerate the transition of heavy goods vehicles to zero emission technologies. According to Magtec, that doesn’t necessarily mean throwing away old vehicles.

The company takes a seven-year-old diesel refuse truck that is nearing the end of its life, strips out the original drivetrain and reconditions the base vehicle before fitting a high-torque electric motor and five batteries, which on a single charge can provide a full day’s operation on a double-shift duty-cycle basis. Magtec also removes the diesel-driven hydraulic system that actuates the rubbish compaction and bin lift systems in favour of a quiet electric-driven system.

At seven years old, an RCV is traditionally stripped for parts or exported, as the cost to maintain it is considered to be greater than the cost of replacement. Magtec claims that the conversion doubles the lifespan of an end-of-life vehicle and provides a £300,000 per vehicle lifetime cost saving over a Euro 5 or older diesel alternative that is non-ULEZ compliant. 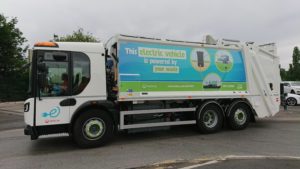 “The quickest and most economical way to reduce harmful emissions in our cities is to repower diesel trucks with electric drives,” said Magtec founder and director, Marcus Jenkins. “Converting one bin lorry to electric is equivalent to taking 30 diesel powered cars off the streets.”

Jenkins’ views are supported by figures that suggest that a refuse lorry operating in largely residential areas runs its diesel engine for around 14 hours a day, returning between 2.5 to 4.5mpg. An electric drive not only eliminates tailpipe emissions but significantly reduces noise pollution.

Sustainable operation of the eRCVs in Sheffield is further enhanced by the city’s ability to convert domestic rubbish into energy at its Energy Recovery Facility, and then use this power to charge the region’s two converted vehicles, with surplus energy fed back into the local grid. The project is representative of the city’s commitment to improving air quality through replacing its fleet of diesel vehicles, which after two years of a six-year programme, has replaced more than 350 of its oldest, most polluting vehicles. The aim is to replace around 1,100 vehicles with electric or ultra-low emissions alternatives.

“This new electric solution now opens new possibilities for cleaner air in cities, with the potential of recharging the vehicles using electricity generated from the waste they carry via Energy Recovery Facilities,” said Veolia’s Gavin Graveson, on the roll-out of eRCVs for City of London Corporation, announced in March. “It marks a major step forward towards carbon net zero targets, and highlights how local authorities can drive sustainability by using green solutions to address their environmental challenges.” 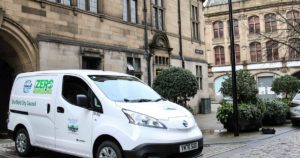 As a further demonstration of these solutions, and of the benefits of extending end-of-life through sustainability programmes, in March Veolia announced a partnership to promote closed-loop recycling of end-of-life EV battery materials. The consortium, which includes Solvay and Groupe Renault, aims to develop a sustainable supply source for materials that are crucial for EV battery manufacture, such as cobalt, nickel and lithium, by efficiently collecting end-of-life EV batteries and extracting then purifying the key elements. Previously recovered strategic metals have been often only suitable for metallurgical applications, but the consortium aims to enhance the extraction and purification processes to reduce the environmental impact of producing new EV batteries: extending the useable life of core elements, just as upcycling RCVs has achieved.