Self-driving commercial vehicles: are they right around the corner?

Self-driving commercial vehicles: are they right around the corner? 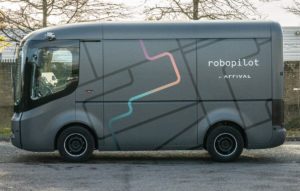 Autonomous driving of commercial vehicles has been a subject of debate for years, but the idea now seems to be becoming reality with manufacturers and operators beginning to test the technology within depots and on public roads.

The current driver shortage – the UK is currently suffering from an estimated deficit of about 65,000 HGV drivers – has also posed the question: can self-driving vehicles provide part of the solution?

This year motorway trials of autonomous HGV platoons restarted after the project was postponed when the Covid-19 pandemic hit the UK.

Routes taken by the platoons are not being released but the on-road trials will run for nearly six months, followed by a period of analysis and report writing.

During the trials, each HGV will still have a driver ready to take over manual control.

Tyre company Continental has also been working on an autonomy project in Germany with braking components manufacturer Knorr-Bremse.

It has tested several scenarios including lane changes, overtaking and also scenarios around the point where the trucks can leave and enter motorways.

“The next steps will involve manoeuvring in confined areas – inside transport depots for example – and tackling distribution-hub-to-distribution-hub runs.”

It is the first time where an Arrival van has manoeuvred around a facility without a human driver inside the vehicle and it was able to autonomously complete all operations that are performed daily by a commercial fleet driver.

Arrival’s ADS, which uses in-house algorithms combined with hardware, is also set to be adapted for use on the manufacturer’s buses.

“Depot manoeuvres are the most accident-prone parts of a worker’s shift and with our technology, we hope to introduce greater safety by removing human driving errors happening in confined environments.

“We are starting with a fixed controlled environment in the depot, where we are truly able to test and validate our technology. We can then understand how it will operate on public roads, in our vehicles, and how it can be implemented worldwide.”

Hermes and Ford have also been conducting trials with ‘hidden’ drivers to help understand how people are likely to respond to autonomous delivery vehicles.

A specially modified Ford Transit features sensors designed to mimic the look of a fully self-driving vehicle, while a ‘human car seat’ allows a concealed human driver to operate the vehicle in a way that leads others to believe nobody is behind the wheel.

Pedestrian couriers load and unload the van, assisted by a smartphone app that allows the vehicle to be hailed to their location and the cargo doors to be unlocked.

Richard Balch, Ford of Europe Director, Autonomous Vehicles and Mobility, said, “As we plan to bring autonomous vehicles to the roads, it is important that we focus not only on enabling the technology, but on enabling our customers’ businesses.”

Ocado, which hopes to see prototypes developed within two years, is fitting out some delivery vans and warehouse vehicles with video cameras and hi-tech sensing devices to record data to share with Oxbotica

It will initially focus on Ocado’s UK business, where the company operates a joint venture food delivery service with Marks & Spencer.

“We are excited to develop a wide range of autonomous solutions that truly have the potential to transform both our and our partners’ operations”, said Alex Harvey, Chief of Advanced Technology at Ocado Group.

Also, at the recent IAA Munich Motor Show, Volkswagen publicly revealed the first prototype version of a self-driving van, based on the forthcoming fully-electric ID.Buzz.

The manufacturer plans to start building fully autonomous vehicles that can drive themselves in city centres and in all types of weather, and a total of five prototypes will be tested in Hamburg by the end of 2021 ahead of a commercial deployment in 2025.

Volkswagen is also working with its partners – including its own ‘ridepooling’ division, MOIA and Argo AI – on sensors, high-power computing and an algorithm in order to develop a ‘digital driver’ that is safer than a human one.

The self-driving technology is being incorporated into the production version of the all-electric ID.Buzz – which is expected to be rebranded the ID.7.

Christian Senger, Head of Autonomous Driving at Volkswagen Commercial Vehicles said: “An environment recognition system from six lidar, 11 radar sensors and 14 cameras, distributed over the entire vehicle, can capture much more than any human driver can from their seat.” 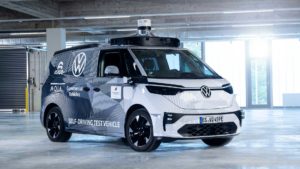 However, the days of the human driver seem far from numbered and the shift is likely to be gradual and largely dependent on a combination of the regulations, public acceptance and the proven safety of the technology on the road.

The current goal for most truck and van builders is not to develop a fully autonomous driving vehicle where it can perform all driving tasks autonomously under all conditions and no intervention by a person is needed anymore.

Instead, the aim, at least in the short term, is to develop high autonomy vehicles where, if necessary, the driver can take over the steering.