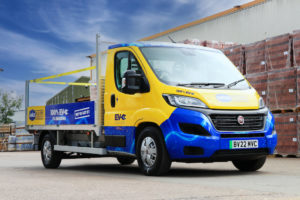 Builders’ merchant Selco has acquired its first electric dropside van as it continues its transition to a fully sustainable commercial fleet.

The Fiat e-Ducato, which has a payload in excess of 2,866 lbs and a range of up to 145 miles, is operating from the firm’s Birmingham Delivery Hub for a trial period.

Alternative cleaner fuels have become an increasing part of Selco’s fleet, with all vehicles at its two delivery hubs in Birmingham and Edmonton now operating on either compressed natural gas (CNG) or hydrotreated vegetable oil fuel.

Selco also has a dozen electrically powered counterbalance forklift trucks across its 73-strong branch network, while there are seven CNG vehicles currently in operation, with three to add later this year.

The company has directly supported the planting of more than 260,000 trees across two sites in Scotland and Wales as part of its carbon-offsetting programme, with plans for a third ‘Selco Forest’ to be planted in early 2023.

Richard Evans, Head of Transport Operations at Selco, said: “This is an extremely important development in our ongoing transition towards operating a fully sustainable commercial fleet.

“Dropside vans make up a large percentage of our fleet, so this trial will be crucial to seeking vital information on the suitability of commercial electric vehicles and help determine our route to zero emissions.

“We have been clear about our commitments around sustainability and we are now making swift and sizeable progress in terms of reducing our carbon footprint within the transport fleet.”