Martin Hay will retire from his position as managing director for Scania (Great Britain) after more than 30 years with the company. His replacement will be announced on completion of the recruitment process. 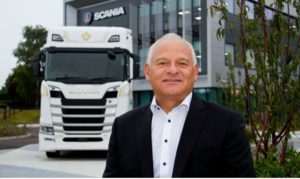 Hay was appointed to managing director in 2018 and previously served as Scania AB vice president for truck sales, where he helped oversee the development and commercialisation of the company’s new generation trucks. He also worked within the dealer network and from Scania’s Sweden headquarters before moving to GB’s Milton Keynes home as sales director.

The outgoing managing director said, “The time feels right for me to move on, as I have decided to make a lifestyle change which I believe will be in the best interests of myself and my family. I will be leaving behind me a hugely successful organisation with a great future ahead of it, and now look forward to introducing my successor to the fantastic team in Scania UK, a team which has generated continued success over the course of many years. I would also like to take this opportunity to thank all of our customers for their support and continuing loyalty to the brand during my tenure and wish them every success for the future.”