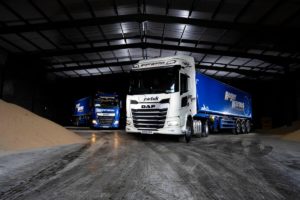 The Norfolk-based operator is one of several operators across Europe involved in the extensive New Generation DAF field test programme.

Fitted with the 10.8-litre PACCAR MX-11 engine, producing 450bhp and 2,350 Nm of torque from 900rpm, the New Generation DAF XF 450 comes with a full air-kit, including roof spoiler and side collars, and full LED lighting with integrated skylights.

The new truck supports Roger Warnes Transport’s broad client portfolio, hauling predominantly foodstuffs and building materials to destinations across the UK. The company operates out of two sites in Norfolk – a headquarters based in Great Dunham and a larger depot in nearby Kings Lynn.

Ian Barclay, Operations Director at Roger Warnes Transport said: “As a bulk haulier, the New Generation DAF XF’s low kerb-weight is really benefiting us as we’re paid by the kilo.

“It’s allowing us to maximise payload and drive down costs. Even with our wet-kit fitted and a full 700-litre fuel tank, we’re still easily hitting our 29-tonne payload target.”