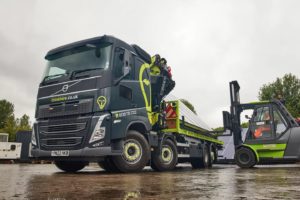 A North West renewable energy supplier has put its first ever truck on the road – a new crane-equipped Volvo FH 460 – to help it keep pace with growing demand.

Think Hire will use the new 8×2 rear-steer rigid truck to deliver its range of solar generators, renewable power and site establishment products to a nationwide customer base.

The new FH, supplied by Thomas Hardie Commercials, is mounted with a Fassi 710 crane and flatbed body, which was supplied and fitted by The Crane Centre in Cheshire.

The vehicle is also equipped with VBG drawbar coupling for pulling a trailer when required.

Safety is improved with additional cameras and FORS equipment, a passenger lower door window to improve visibility, and Volvo Engine Brake Plus.

The truck comes with a five-year contract hire agreement with Volvo Financial Services, which incorporates a Volvo Gold Contract repair and maintenance package.

Think Hire, based in Walkden, Greater Manchester, was established in 2018 and provides relocatable renewable energy solutions and solar hybrid power generation, for hire and sale nationwide.

Ian Potiatynyk, Head of Contract Delivery at Think Hire, said: “We want the truck to be comfortable for the driver and robust enough to carry heavy equipment.

“Our solar generators can be around four and a half tonnes each, including the lifting gear, but the FH can handle that with ease.”