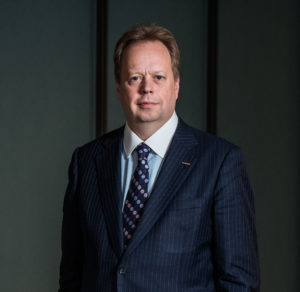 Andy Palmer has made the move from chief executive at Aston Martin to non-exec chairman of Optare. We speak to him about his plans and vision for the UK bus company

TNB: From luxury sports car maker to bus company – it really is a different ball game isn’t it?

I was also the architect of the Nissan LEAF, which I would argue was one of the cars that sparked the current phase of EVs. There was a big part of me that wanted to get back into the EV business, so this is one step in that direction and, obviously, the intention is that Optare will be predominantly making electric buses. I think that Darwinism – a natural evolution in transport, so to speak – is driving us that way anyway because what people want to buy now is EV buses, so all our future growth will be based on EVs.

Optare, and its parent company Ashok Leyland, both have long histories. Ashok was formed from the Leyland Motor Company in 1907 and Optare started in 1985. How much does that combined history play a part in what you are going to be doing in the future?

The history of a company is an important reference point, but I don’t think it should constrain you. For example, there was always a debate about my insistence at Aston Martin that we must have an SUV, so in that respect the past didn’t dictate the future.

Ashok Leyland predominantly trades in India and the sub-continent while Optare is in the UK. That’s fine, but we are coming to a pretty significant T-Junction on whether we base all our growth on EV or try to keep our feet in both camps. What I am implying here is that we must go down the Zero Emission route: we have an opportunity to change and also consider what the brand stands for.

Ashok Leyland, which has 99% ownership of Optare, is part of the larger Hinduja Group in India. Do you have enough autonomy to make your own decisions without interference? For example, will Optare have to use the modular approach that Ashok Leyland has developed for its trucks?

We are forming the strategy now and the Hinduja family are not insisting on anything. I do, however, understand importance of carry-over/carry-across. In the instance you cited you can’t simply carry over a platform for an electric vehicle and, in any case, it will not be optimised for our buses. We are going to end up with bespoke EV modules at Optare, but believe me, I am going to raid the corporate parts-bin to get anything I can re-use. When we sell buses in India for example, there are certain formats of that bus that lend themselves to being carried over from the Ashok Leyland parts-bin.

Optare produces around 250 buses a year from its UK plant in Sherburn-in-Elmet. Can you produce more?

We can and we must. We are still building a business plan right now, and we can see that there is a clear demand for EV buses. Most of the world’s buses are from China and that brings an economy of scale advantage for the Chinese OEMs. What we need to do is generate similar economies.

How do you see the future for zero carbon transport?

There are a hundred different views in the industry on what the right type of powertrain is and I don’t think governments should legislate one type of solution over another. It’s about finding a solution to a problem, and I think engineers are better at fixing those problems.

I am a great believer in the concept of Darwinism. Let various concepts compete, because what we will eventually end up with will be better for all. In the car and truck world all manner of technologies are fighting to compete, be it clean petrol and diesel engines, hybrids, plug-in hybrids, range extenders, EVs and hydrogen fuel cells.

As far as the technologies that I think are worth hanging on to, first amongst equals is EV. This technology suits a specific mission, which is for low mileage and short commutes. EVs are perfect for the inner city because the infrastructure to support them is relatively cheap, and EV is a perfect technology for urban buses: they are working to a defined mission and you can make sure that the size of the batteries are sufficient to complete that mission.

And in terms of changing the landscape/air pollution, the simplest thing the local mayors and politicians can do is basically take out the diesels and replace them with electric buses.

There is a case for hydrogen, but it’s not ready yet. I have been working on hydrogen personally for 15 years and the issue usually is the infrastructure costs. It’s also not as efficient as an electric motor and although you have some fairly significant packaging challenges to overcome, for HGVs and long-distance coaches, hydrogen could be a solution.

I say ‘could be’ because it could be challenged by solid-state batteries, or even synthetic fuel, which is particularly interesting to me. The fact that you can achieve carbon neutral using pretty much an internal combustion engine but with a fuel system that is synthetic is very attractive. And, given the installed capacities that already you have around the world – and I am thinking particularly of sports car, which obviously I have a great interest in – synthetic fuel could be an interesting alternative to both EV and fuel cell.

In a recent Transport Focus survey, the results showed that young people are not great fans of the bus. How can you attract young people back into buses?

Personal transportation has a marketing problem with Gen Y and Z. They have different priorities and they don’t have the same need for escapism that the older generation has had. Bus companies need to attract their customers by making sure their products have good connectivity, are more attractive and genuinely make them part of the solution, not part of the problem.

When was the last time you used a bus and what was it like?

I used a bus last time I was in London, which was pre-lockdown. I was going to walk to my destination, but it was a rainy day and it was on a bus route. It was easy to jump on and jump off. It was on one of those new Routemaster double-decker buses and it was a very pleasant experience overall. Progressive cities like London understand that transportation is part of that iconic nature of that city. The black cabs in London and the yellow cabs in New York are part of the charm of those two cities. The UK is somewhat defined by its red buses, red telephone boxes, black cabs… and Aston Martins, of course.