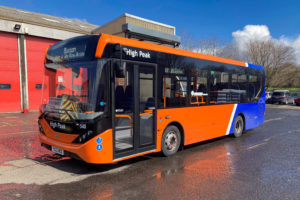 The seating layout of the shorter buses was modified by ADL to provide additional forward-facing, fixed ADL SmartSeats instead of tip-up seats, while the third vehicle – a former demonstrator – was converted to a single-door layout and upseated by ADL’s service workshops.

All three were painted in Centrebus’s fleet livery ahead of delivery.

High Peak Buses is a jointly owned subsidiary of The Wellglade Group and Centrebus, and is managed on a day-to-day basis by Centrebus.

In addition to core commercial services running from Derby to Manchester Airport, it operates a network of contracted bus services for local authorities, schools, universities, businesses and the NHS.

Keith Hayward, Centrebus Director, said: “As we continue to invest in our modern fleet, ADL met our requirements for additional single deckers with a combination of two brand new vehicles and a former demonstrator that the team at the manufacturer converted to our needs and finished to the same high standard as a factory-fresh bus.

“All three will fit well into our High Peak Buses fleet and underline our commitment to the commercial and contracted services we operate in the Peak District.”