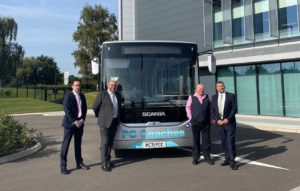 The vehicle is the Fencer f1 demonstrator which featured in the global launch of the range, which was staged in the UK in May.

It will now enter service on PC Coaches’ fare stage operations in Lincolnshire and join the firm’s fleet of 68 Scania heavy buses and coaches.

The nine-litre Scania engine fitted to the first Fencer vehicles will be SCR-only and meet the requirements of the Euro 6 Step E emissions standard.

Other features of the transmission include fast and smooth shifting and a new ‘unloaded starting’ feature which enhances passenger comfort by reducing noise, improving starting performance and delivering consistent acceleration.

The Fencer range is available with hybrid and gas power including BioCNG and BioLNG options, and in 2022 will feature Scania’s 100 percent battery electric powertrain.

Martin West, Sales Director – Bus and Coach for Scania (Great Britain) said: “While PC Coaches’ vehicle has our tried, tested and proven nine-litre engine, which can be operated on 100 percent HVO (Hydrotreated Vegetable Oil) biofuel, the Fencer is built on a new chassis which has been designed from the outset as a future-proofed platform with a comprehensive selection of renewably-fuelled drivetrains including full battery electric and hybrid versions and biogas options.”