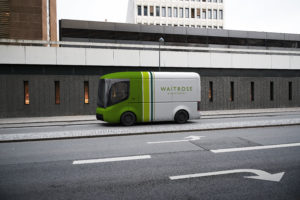 The nation is braced to accept ‘the new normal’ and it is no different for the transport sector. Fleets have treated the boom in home deliveries – the latest lockdown announcement sparked contingency measures, such as virtual queuing systems and restricted website access, from some of the UK’s largest online grocery retailers – as an opportunity to expand fleets and challenge established operations through accelerated adoption of alternative fuels and more efficient processes.

Part of the response from supermarkets since March 2020 has been to vastly expand home delivery slots, while some have embarked on novel partnerships with companies such as Deliveroo to grow physical capacity. Parcel delivery companies have experienced a huge upturn in demand for their services and have seized the opportunity to expand fleets while embracing emissions-reducing technology and adapting their approach to last-mile deliveries.

DPD, for example, recruited 3,500 new drivers and expanded its fleet of electric vans from 130 at the start of 2020 to more than 700 by year-end. Handling more than a million parcels a month during traditionally off-peak times, which its CEO Dwain McDonald describes as “more akin to the festive seasonal peak,” more than 10% of its van fleet is now electric. The company will also be trialling the world’s first 16-tonne electric truck, the Volta Zero in early 2021, is working with Electric Assisted Vehicles (EAV) to develop a new lightweight zero-emissions delivery vehicle and is partaking in trials of the new LEVC VN5 and Vauxhall e-Vivaro electric vans.

“We originally targeted 500 EVs this year,” says McDonald. “Despite everything that has been going on, we’ve been really focused on getting EVs on the road and delivering for us this year. Yes, you need to be trialling new technology and looking at future concepts, but you have to start making the difference now.”

Asda has increased its home shopping capacity by 90% in the face of growing demand, offering nearly 850,000 weekly delivery slots. Fleet expansion – including 25 new ‘sustainable delivery vans’, that offer 10% mpg improvement alongside larger cargo and 300kg reduced weight through use of recycled plastic water bottles as insulation – is only one aspect of its capacity ramp-up. The company doubled its Uber Eats partnership, which provides 30-minute deliveries from 200 stores nationwide and also trialled an EAV cargo bike suitable for urban deliveries: capable of 15mph, it can carry 10 totes of shopping, the equivalent of two customers’ orders.

Tesco, now completing 1.5m online grocery orders a week, announced its ambition to operate fully-electric fleets by 2028 and hit net zero emissions in the UK as a company by 2035. The grocer rolled out a fleet of 30 new electric vans on to the streets of Greater London in November alone and has created 20,000 new permanent jobs since the start of the pandemic to “support the exceptional growth” of its online business. Of these jobs, 3,000 were drivers.

Waitrose is also aiming to fulfil increased orders and tackle the need to reduce emissions by doing more than simply expanding fleets. The company now completes four times as many home deliveries – 200,000 per week with plans to increase capacity to 250,000 – than pre-Covid-19 and, in September, embarked on a trial with Deliveroo to complement its existing fleet.

The store, alongside John Lewis, also announced plans to end the use of fossil fuels in its fleets by 2030, “saving over 20,000 tonnes of CO2 every year.” The plan is to achieve this through adoption of electric delivery vans, with trials beginning soon in 2021, and development of a biomethane gas filling station for its HGVs. This will, says the company, reduce CO2 emissions by 80%.

“As our online services rapidly expand, we’re working hard to meet our goal of operating a zero fossil fuel fleet in the next 10 years,” explains Justin Laney, partner and general manager of central transport at the John Lewis Partnership. “Our new electric vans are an ideal solution for home deliveries; the innovative design means they’re more efficient (increased capacity means that two electric vans can replace three diesel vehicles), but also respectful to the environment.”

Growth of EV van fleets is a trend continued by Co-op, which last week introduced a fleet of eight new Mercedes-Benz eVito vans to complement the emergence of Appy Shop and Snappy Shopper platforms. “The impact of our operations on the environment sits at the heart of every decision we make, which is why the eco-credentials of the vehicles used to launch these two new services had to be front and centre,” says Gary Tomlinson, central England Co-Op transport manager, of the investment, which includes the installation of charging points at participating stores across Norfolk, Leicestershire, Staffordshire, Birmingham and Derby.

January’s announcement from Amazon, that it has been given the go-ahead to build a London last mile logistics hub, echoes the view of Waitrose & Partners executive director, James Bailey, that, “Even before Covid-19, there are few retailers that wouldn’t have predicted the continued growth of e-commerce relative to physical shops.” However, while online demand grows, it actually presents an opportunity to streamline logistics operations and, in some examples, reduce the number of vehicles on the road. In a bid to drive down emissions in central London, Amazon’s logistics hub will, says the company,  result in 23,000 fewer journeys in the region each year with 85 fewer vehicles on the road every day.

To help with reducing congestion and emissions, Amazon states that the final leg of its central London parcel deliveries will be completed by e-cargo bikes or on foot. This will cover a 1.2-mile radius of the hub in London Wall Car Park – including the entirety of the City of London and some parts of central London.