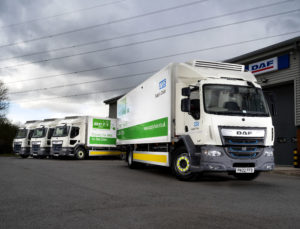 In a £10m pilot scheme funded by the government, 20 DAF LF Electric trucks have entered service with the NHS and local authorities.

NHS Supply Chain will operate eight LF Electric rigids with refrigerated bodies at several locations across the country, as part of the the new Battery Electric Truck Trial (BETT) financed by Department for Transport.

Another five of the vehicles will be used by Local NHS Trusts, while the remaining seven will go to local authority organisations running school supply operations and local council services for general transport and recycling.

As part of BETT, Lancashire manufacturer Leyland Trucks, which builds the LF Electric, is working alongside low emission vehicle research consultancy Cenex to create an interactive report and website.

The LF Electric vehicles will be maintained and supported through DAF’s dealer network and the manufacturer’s Academy Driver Training will train the drivers involved.

Supporting the trial are 14 Paccar battery-charging units stationed at 13 operator locations, with capacities ranging from 22kW to 180kW to suit different operational needs.

Rob Lawton, Principal Engineer of Alternative Powertrains at Leyland Trucks, said: “This is a significant step in the project as we roll-out vehicles for real-time operations, we’re working closely with our project partners in order to collect the most accurate data possible.

“Electrification is becoming a major consideration for operators, and it’s crucial they’re able to scrutinise reliable evidence before investing in this relatively new technology.”