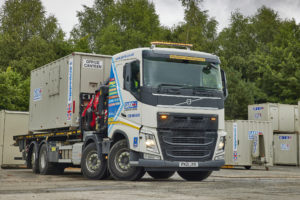 The FHs, supplied by Thomas Hardie Commercials, join the firm’s 30-strong fleet, and are each mounted with a Fassi 710 crane and flatbed body, supplied and fitted by The Crane Centre in Sandbach.

They will be used to transport plant and machinery to customers around the UK, powered by Volvo’s D13K engine, producing 460 hp and 2,300 Nm of torque.

The FMs will each be equipped with bespoke-built Fuller Tankers bodywork and a factory-fitted lower passenger door window for added safety, allowing the driver to have better visibility of other road users.

These trucks will be used to support the firm’s on-site welfare cabins, removing waste water and refilling fresh water and red diesel tanks – with power from Volvo’s D13K engine, delivering up to 420 hp and 2,100 Nm of torque.

The vehicles have been supplied on a five-year contract hire agreement with Volvo Financial Services, which incorporates a Volvo Gold Contract repair and maintenance package.

Garic’s Transport Manager, Mark Booth said: “These new vehicles are replacing some older competitor models and the feedback we’ve had from our drivers has been great so far.

“They are particularly happy with the amount of space inside the sleeper cab on the FHs and the lower fuel consumption of the trucks ties in well with our sustainability plans and route to carbon zero – something that’s really important to our business right now.”