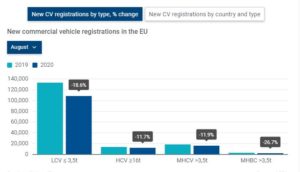 New commercial vehicle registrations in the European Union have declined by 28.2% for the first eight months of 2020, according to latest figures released today by the European Automobile Manufacturers Association (ACEA).

Each of the 27 EU markets have recorded double-digit percentage drops for the year so far. Shoots of recovery were hinted at in July, when a minimal drop of 0.9% was recorded across all commercial vehicle segments with growth in Italy, Spain and France, but demand in August dropped by 18% overall. August’s figures show that registrations in Spain have dipped by 23%, in Germany by 22.7% and France by 3.1%, while Italy grew by 2.6%.

Demand for light commercial vehicles dropped by 18.6% in August. Figures were boosted by a 4.1% increase in Italy, but hit by 24.4% and 22.2% contractions in Spain and Germany respectively. France, the largest van market in the EU, registered a 2.1% drop for the month.

Germany, the largest market for medium and heavy commercial vehicles over 3.5 tonnes, saw registrations in this segment tumble by 26% in August. Italy recorded a 20.6% growth, contributing to an overall decline of 11.9%.

Registrations of heavy commercial vehicles of 16 tonnes and over dropped by 11.7% in August. Spain (2.2%) and Italy (19.4%) recorded growth, but Germany experienced a significant drop of 29%. From January to August end, demand for this category has dropped by 37.9% compared to 2019’s figures.