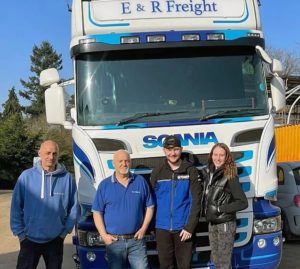 Britain’s transport industry has been working hard in recent weeks to help bring humanitarian aid to the people of Ukraine amidst the war and devastation caused by Russia’s invasion.

Hauliers have provided drivers and trucks to send refugee aid packages to the Ukraine-Poland border among a range of forms of support to Ukrainians fleeing war in their country.

For example, Pallet-Track coordinated the delivery of more than 100 pallets of vital aid from its central hub in Wolverhampton on behalf of the Association of Pallet Networks’ Ukraine appeal.

“When you’re sitting at home watching what is going on with tears in your eyes, you want to do whatever you can to help,” Richard said.

“Members of the APN have all been so generous with donations of things like blankets, dried dog food and new clothes.”

They travelled from the haulier’s Penrith site to its depot in Sittingbourne, Kent, where the donations were transferred onto two of the company’s special European trucks before being sent to Poland.

The donations have since gone to a charity in the town of Zlotoryja in western Poland, to be distributed to Ukrainian refugees who have escaped their country with little or nothing.

Teddy Stamper, Transport Manager at A.W. Jenkinson Transport, said: “Providing this service for free is the least we could do. We wanted to do anything we can to help ease in a small way the suffering of these people, who have been going through something horrendous.”

The campaign has helped the British public to provide shoe boxes full of toys for more than 50,000 primary school-aged Ukrainian children seeking refuge across the country, as well as in Eastern Europe.

To make a shoebox donation, people can visit Play Action International’s website where they will be directed to print off a label via Yodel’s website.

People can donate items at 6,000 drop-off points for Yodel to deliver to Play Action International’s partner organisations, which distribute the toys to those in need.

Mike Hancox, CEO at Yodel. said: “We’re very proud to be partnering with Play Action International to launch the Play Box Appeal and to be able to support Ukrainian children and families at such a difficult time.

“Our network will help much needed toys and play items to be collected across the UK.” 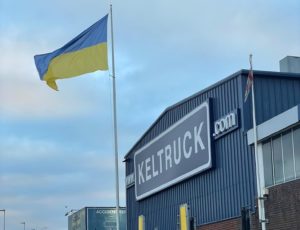 Scania dealer Keltruck has donated money to the Disasters Emergency Committee and British Red Cross via the Charities Aid Foundation to deliver aid on the ground in Ukraine and to refugee camps in neighbouring countries.

The dealer, hoisting the Ukraine flag above its head office in West Bromwich, has also provided a Scania 530S demonstrator to take part in an aid mission to Poland by haulier Lomas Distribution.

Chris Kelly, Keltruck Chairman, said: “As Ukrainian refugees start arriving in the UK we will be encouraging staff, customers and suppliers to help in any way we can.”

Mansfield haulier Taylors Transport has organised its own relief effort in response to a plea for help from a local resident who is originally from Poland.

Since the war began, donations of food, clothing, nappies and other urgently needed items have flooded into Taylors’s distribution centre in Huthwaite, Nottinghamshire.

Ian Middleton, Managing Director of Hartshorne, said: “We have a long-standing relationship with Taylors, who have done a fantastic job of organising a relief effort.

“We felt the least we could do was to loan them an extra truck, which is now in the process of transporting humanitarian aid.” 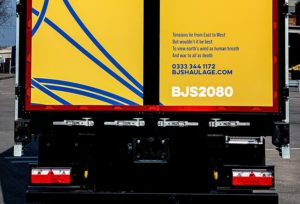 Other transport companies in the UK have been showing their support in the UK. For example, Wednesbury logistics company BJS Haulage is operating a bespoke blue and yellow liveried truck featuring a thought-provoking anti-war poem by staff member and writer Katy Walton.

In Llanelli, Owens Group has offered to provide space for any Ukrainian drivers who needed to park up their HGVs in order to return home due to the escalating conflict in their country.

The haulier says it will ensure that the vehicles are kept safe and secure free of charge until the drivers return.

SMMT is currently working closely with the UK Government and sister associations to provide guidance and information to help members with their ongoing handling of the crisis, and to feed back industry intelligence to understand the war’s effects on the sector.

The trade association is also providing regular updates to members, including intelligence on UK and international responses, the latest sanctions imposed by UK and global governments and assessments on the impact on automotive businesses and their staff.

Mike Hawes, SMMT Chief Executive said: “The UK Automotive industry supports the actions of the international community to bring an end to the conflict through all diplomatic, financial and trading mechanisms as well as the provision of specific support to the people of Ukraine.

“Inevitably, there will be an impact on the sector and SMMT will support its members in their efforts both to protect their staff who may be affected as well as with the pressures it will put on their business.”

At times like this it is encouraging to see the road transport industry in the UK pull together in a spirit of huge generosity and humanity and help those devastated by the war.