Lunaz focuses on CV sector electrification after latest funding round 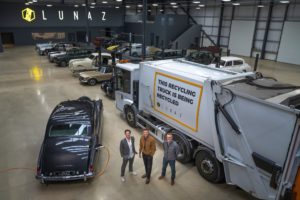 Electric vehicle convertor Lunaz has received four separate investments, including from David Beckham, who has taken a 10% stake in the company, which will enable the company to expand into the CV sector.

Lunaz has previously converted classic cars to electric powertrains, and is now turning its attention to Class 6, 7 and 8 HGVs, including refuse trucks and fire engines. It claims that its remanufacturing and electrification process can extend the life of up to 70% of the embedded carbon within a vehicle, and that a local authority could save up to 43% in total ownership costs by electrifying an existing fleet refuse truck when compared to buying new.

Lunaz’s proprietary powertrain is modular in design, making it suitable for a wide range of CVs, and has been developed by former F1 World Championship winning technical director, Jon Hilton.

David Lorenz, Lunaz founder and CEO, said, “The upcycling of existing passenger, industrial and commercial vehicles presents a sustainable alternative to replacing with new. Our approach will save fleet operators capital while dramatically reducing waste in the global drive towards decarbonisation.”