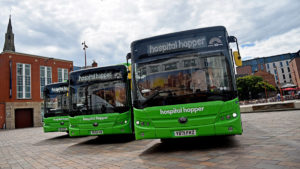 The new Hospital Hoppers will become part of the new Greenlines electric bus network, which already serves all three Park and Ride sites in the city.

Hospital Hopper is replacing its current diesel vehicles with a fleet of fully electric buses, with features such as free USB chargers and passenger information screens.

This electric bus service is being launched in partnership with the University Hospitals of Leicester NHS Trust, and bus operator Centrebus.

It is part of the Leicester Buses Partnership – an ambitious bus partnership programme of work between Leicester City Council and all local bus operators to improve services, routes and vehicles across the city.

A total of 96 more battery-electric buses for the city will follow thanks to an award through the Zero Emission Bus Regional Areas fast-track mechanism, with further funding from operators and LCC.

“The state-of-the-art vehicles are all fitted with full air conditioning, and not only travel with zero emissions, but are also whisper quiet in operation.

“It is a testament to the Council and local bus operators that their bus partnership is being implemented so quickly, with 15 Pelican supplied vehicles in service already.”