Last month the UK Government announced its latest multimillion-pound package to accelerate the number of electric and hydrogen powered buses being put into service across England.

A total of 943 zero-emission buses will be funded through a £198.3 million Zero Emission Buses Regional Area (ZEBRA) package that will also finance local charging or fuelling infrastructure across 12 towns and cities.

The Society of Motor Manufacturers and Traders (SMMT) has welcomed the move, which will encourage more passengers back on board, address environmental concerns, especially in towns and cities, and give a boost to British automotive manufacturing.

Mike Hawes, SMMT Chief Executive, said: “Greater funding for zero emission buses will be massively welcomed as the sector has had a torrid time because of the pandemic.

About 600 zero-emission buses have already been paid for in Scotland, Wales and Northern Ireland as a result of the block grant to the devolved administrations.

Government funding of Transport for London has also supported the introduction of 300 green buses in London.

Sukky Choongh, Environmental Manager at SMMT, says she expects the purchase of these zero-emission buses to go hand in hand with the provision of necessary dedicated infrastructure at depots.

“DfT provide 75% of the funding towards depot upgrades so we expect in cases where public funding has been provided that charging will keep pace with the increase in buses”, she said.

“EV bus registrations are generally accelerated through public funding competitions, and outside of when funding is available, there is little growth in the EV bus market.”

Portsmouth City Council was awarded £6.5m in ZEBRA funds to be used as part of its partnership with First Solent and Hampshire County Council.

The 34 new electric buses will replace the current diesel fleet and operate across Gosport, Fareham and Portsmouth to support air quality improvements on the routes that travel through four of the city’s air pollution hotspots.

Meanwhile, the West Midlands will introduce a fleet of 124 new hydrogen fuelled buses along with a new refuelling facility following the approval of £30m in ZEBRA funding.

Pete Bond, Director of Integrated Transport Services at Transport for West Midlands, said: “These hydrogen buses, the All Electric Bus City scheme in Coventry and the roll out of electric vehicle charging facilities we are planning shows how the West Midlands is leading the way on decarbonising our transport and making good progress on achieving our net-zero targets.

“It also presents an incredible opportunity to make the West Midlands a world leader in the new hydrogen economy.”

In York, First Group will contribute £10m towards its new buses, alongside £8m in ZEBRA money. Once delivered, the vehicles, expected to be from new manufacturer Arrival, will mean the city has 77 electric buses in service.

Andy Burnham, Mayor of Greater Manchester, said: “This is a significant boost to our ambitions for a fairer, greener bus system. Zero-emission buses play a critical part in our drive to help more people travel sustainably.

“We welcome the government’s backing, and we look forward to further support as we continue to build an integrated and affordable public transport system.”

Oxfordshire County Council was awarded £32.8 million from ZEBRA to fund 159 electric buses. Along with £6m from the council itself and £43.7m from bus companies Stagecoach and the Go-Ahead Group – which includes the Oxford Bus Company, Thames Travel, and City Sightseeing Oxford – the scheme will deliver electric buses and the infrastructure required to charge them in a £82.5m package. However, the vehicles will only start to be delivered between the summer of 2023 and the spring of 2024.

“However, we are seeing a delay of over a year from when funding is awarded to when orders are placed. The administration of the scheme should be more streamlined and efficient.”

UK manufacturing companies such as ADL and Wrightbus, with production facilities based mainly in Scotland, Northern Ireland and the North of England, are also set to benefit from ZEBRA. 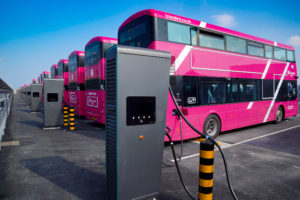 Some cities are already pressing ahead with the introduction of new green buses, but there is concern that other parts of the country not successful in the bidding this time around could be left behind.

Choongh said: “Some authorities do not have the resources and/or expertise to put in sophisticated funding bids to even access the grants to purchase zero emission buses.

“Further support and guidance from government would help.”

The coach industry, meanwhile, will also need a dedicated and complete package of measures, including incentives, plus suitable parking and charging provision across the UK to support its decarbonisation journey.

So far there has been no incentive to decarbonise this sector, with the first calls for evidence on the end of sale of new, non-zero emission coaches only commencing within the last month.

“The diversity of the coach sector ranges from home to school trips to long range luxury travel, meaning there is no single, easy solution”, Choongh added.

“Additionally, the public realm challenges need to be addressed. Dedicated coach parking is not readily available at all destinations, so where do you put the charging?

“A holistic approach to decarbonisation is necessary that considers parking, charging and the welfare of passengers.”

There is widespread agreement however that the latest funding package from the government represents a huge step forward on the road towards cleaner bus travel around the country.