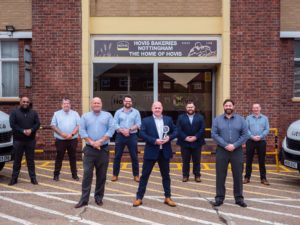 The annual award is made following an in-depth study of driver data captured from in-truck telematics systems, and driver performance across areas including acceleration and deceleration, braking, fuel economy and safety.

This year’s analysis found Hovis had more drivers in the top 1,000 nationally than any other company.

The baker employs around 600 drivers across its network, operating a mix of Class 1, Class 2 and 7.5 Tonne vehicles, all equipped with Microlise telematics systems.

Since introducing telematics across its fleet, the company has seen improved driving styles, with drivers taking a real interest in their individual performance. This has a positive impact on safety, fuel efficiency and vehicle running costs.

This cultural improvement has been led by a team of in-house trainers who deliver assessments and CPC training, focusing on developing drivers and their awareness. It has also seen the company make steady improvement, with members of its team winning the Microlise Driver of The Year award in 2018 and the Young Driver of the Year award in 2019.

Adam Bassant, General Manager Hovis Logistics said, “It’s essential that we have drivers who care about what they do and are true ambassadors for the Hovis brand and the logistics sector in general.

“Developing our drivers and improving the culture is something we’re passionate about and it’s great to see our drivers reaching their true potential.”

He added that the award was particularly well-timed, coming after Hovis drivers keeping the nation’s supermarket shelves stocked with fresh bread during lockdown.

“The past few months have been very challenging,” said Adam, “but Hovis has responded to increased demand, virtually overnight, with our drivers playing a key role in supporting this unprecedented demand.

“It’s a tough job driving for nine or 10 hours a day, often in and around our big cities, so this is fitting recognition for the drivers, the in-house trainers and the managers who contribute to making that happen day in and day out.”

Bob Harbey, Executive Director of Microlise, said the awards are helping to drive cultural change and driver improvement in fleets across the UK and that, as a result, standards are improving year-on-year.

He added, “The standard of entries was simply outstanding and a true credit to all those companies who entered the awards. Although for many, it has regrettably taken a global crisis to highlight the critical role of drivers, it remains our privilege to take part in recognising the best organisations and drivers who deliver with such commitment and expertise and literally keep our economy moving.”