Pelican Bus and Coach is to be recognised as an official UK knock-down plant for Chinese bus and coach manufacturer Yutong. Vehicles will land in the UK for final assembly at a new facility developed from the former Ryder Trucks depot in Castleford, West Yorkshire. The agreement will generate an additional 170 jobs. 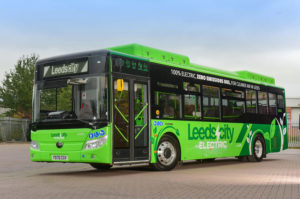 Pelican has been the UK and Ireland importer for Yutong, the world’s largest bus manufacturer by sales volume, since 2013. Its mid-size E10 electric bus is currently used all over the UK, including Newcastle, Leeds, Newport and by Transport for London. The E12 has been in operation in the UK since 2017 in cities including Oxford.

Pelican managing director, Richard Crump, said, “We are proud to be supplying state of the art vehicles that allow local communities to benefit from zero emission transport on their streets. The £2m investment in new premises, staff and parts demonstrates our continued commitment to the UK economy and our local area.”

Of the agreement, Ian Downie, head of Yutong Bus UK, explained, “Increased UK content, with local employment based not only in Castleford but also around the UK, reflects both the demands of our customers and our growing success in zero emission buses and coaches. Our vehicles now have a much greater level of UK sourced equipment being fitted in the UK. As more and more zero emission vehicles enter service, this provides more local employment to our suppliers and also to civil and electrical contractors as the supporting infrastructure is build and commissioned.”