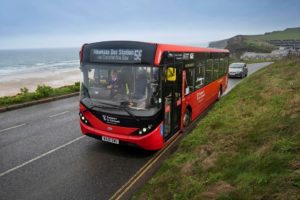 Ticket prices on buses operated in Cornwall have been cut by up to 40% under a government-backed pilot scheme to encourage more people to use public transport.

Four-year scheme Make Big Savings By Bus, run by bus operator Go-Ahead Group, will measure the extent to which lower fares can stimulate a change in travel behaviour amidst a hugely challenging period for the bus sector across the UK.

Funded by Transport for Cornwall using a £23.5 million grant from the Department for Transport, the pilot area stretches from the River Tamar to the Land’s End peninsula, taking in towns and cities including Truro, Newquay, Redruth, Falmouth, Camborne, St Ives and Penzance.

It follows an “any ticket, any bus” initiative that makes tickets interchangeable between Cornwall’s bus companies.

Transport for Cornwall has set a goal of increasing bus usage by 10% across the county and the scheme is consistent with the government’s National Bus Strategy to encourage partnerships between operators and local authorities, as well as to promote the social, economic and environmental benefits of bus usage.

The pandemic has had a significant long-term effect on bus ridership and in turn the industry, with new bus registrations falling to the lowest level on record in 2021 as operators face significant financial constraints. https://www.smmt.co.uk/2022/02/uk-bus-and-coach-registrations-fall-to-lowest-recorded-level-as-pandemic-dents-ridership/ Hyperlink words from ‘new bus registrations’ to ‘2021’

Mark Anderson, Go-Ahead’s Customer and Commercial Director, said: “With petrol prices soaring, this is a timely initiative aimed at persuading motorists to switch to buses in a largely rural part of England.

“To become carbon neutral as a country by 2050, we need to encourage people to switch from car to bus.

“Investment in fares is a useful tool alongside bus priority schemes, flexible ticketing and digital payments to make journeys as swift and easy as possible.”