Glasgow Gritters will spread the merits of hydrogen 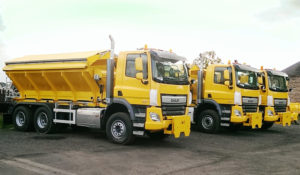 Glasgow City Council’s fleet of gritters will be able to run on hydrogen, thanks to funding from the Scottish Government through Transport Scotland.

Hydrogen conversion outfit ULEMCo will work alongside South Lanarkshire-based James A Cuthbertson, a specialist manufacturer of snowploughs and spreaders, on the pioneering project.

This will see around 20 of the local authority’s gritters converted to run hydrogen dual fuel and entering service in time for this winter.

A further 20 hydrogen enabled vehicles will also be added to the fleet as part of the project.

Based on the gritters’ normal duty cycles, around a third of the energy is expected to come from hydrogen, reducing emissions by the same proportion.

The City Council is also in the process of securing ‘green hydrogen’ for the fleet to refuel. Green hydrogen – or hydrogen produced using renewable power sources – is widely tipped to become an increasingly important fuel source globally.

In February the UK government allocated some £28m for five demonstration-phase hydrogen technology plants – including the two production facilities to be located in Merseyside and Aberdeenshire – as part of a drive to accelerate the nation’s transition to low-carbon.

ULEMCo’s H2ICED® technology ensures that hydrogen is used in the fuel mix when it can burn most efficiently and reduces CO2 and NOx emissions compared with the base vehicle.

“We are delighted to support Glasgow City Council in its ambition to become Britain’s first zero net carbon city and help to ensure that its entire fleet of 2,000 vehicles is carbon free by the end of the decade.”

Ewan Tolson, Sales Manager at James A Cuthbertson, added,  “We see this development as part of a wider roll-out of hydrogen fuelled fleets across the country, and are really pleased that our first such order is with a local authority so close to our factory in Biggar.