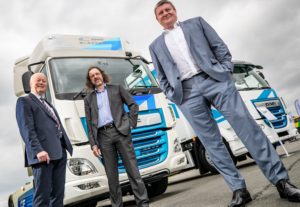 In collaboration with decarbonisation specialists, Egnida and DAF Trucks’ own electric vehicle experts, the partnership embarked upon a month-long, end-to-end appraisal of all aspects of FSEW’s business, encompassing detailed journey analysis and comparison of potential vehicle and charging options, including ongoing support capability.

Results were used by Egnida to create a profitable low-carbon business model for FSEW to extract maximum benefits from the CF Electric and provide a zero-emissions service demanded by FSEW’s own customers.

The trucks now on order form part of an ambitious plan for FSEW to replace more than 40 diesel vehicles with low-carbon alternatives.

DAF’s CF Electric 37-tonner includes a 210kW motor with a range of up to 220km and its quick charge batteries can be recharged in 75 minutes at 250kW.

Once the two CF Electrics are bedded-in, FSEW says it will introduce a further ten vehicles to reduce its carbon emissions by more than 50% in the next nine months. The company says its longer-term aim will be to hit ‘net-zero’ in two-and-a-half years.

FSEW Managing Director, Geoff Tomlinson said: “It’s a change of mindset and a journey which began two-and-a-half years ago and one in which the whole business is engaged.

“If these trucks perform as they should – and we’re fully confident of that following the painstaking evaluation programme – then we’ll be in for another ten DAF CFs.

“DAF Trucks and the local dealer in Cardiff, Watts Truck & Van, have been very receptive to our requirements. Their can-do attitude has helped enormously in our journey here today and we’re very much looking forward to strengthening the relationship.

“As a business owner involved in road transport, and as a father of two small children, I have a huge opportunity, and an obligation, to make a positive impact on our environment and I’m enormously excited at the prospect of leading the switch to zero-emissions transport.”