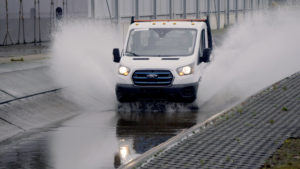 The new Ford E-Transit has been subjected to a series of tests to ensure it’s as tough as its conventional diesel-powered counterparts.

The regime saw the equivalent of 10 years of use and 150,000 miles of driving compressed into just 12 weeks, with a testing schedule that took in the wintry conditions of Michigan, USA, the giant potholes and rough surfaces at the company’s Lommel Proving Ground in Belgium, and the simulated heat, humidity and altitude of the Environmental Test Chamber in Cologne.

“We test all our vans in conditions above and beyond anything they are likely to face in the hands of customers,” said Andrew Mottram, Chief Programme Engineer E-Transit, Commercial Vehicles, Ford of Europe. “The all-electric E-Transit is no different – by pushing it to the limit in our controlled test environments, we can be confident that it will reliably serve our customers as they switch to all-electric power for their businesses.”

Ford’s Environmental Test Chamber can recreate test conditions that range from -35 to well over +40 degrees Celsius. For two weeks, the E-Transit was subjected to the full glare of 28 spotlights with 4,000-watt bulbs, during which the efficiency of its liquid-cooled battery pack was carefully assessed and optimised.

The durability of the E-Transit’s unique rear suspension – independent coils rather than leaf-springs to facilitate the rear-mounted 198 kW (269 PS) electric motor – was tested by repeatedly driving through mud and salt baths to ensure its corrosion resistance, before running the motor continuously for 125 days without stopping.

In case Ford’s efforts weren’t trying enough, the E-Transit will soon begin trials with customers in the utility, supermarket, and last-mile delivery sectors across Germany, Norway, and the UK. The trials will include both E-Transit van and chassis cab variants with conversions from refrigerated bodies and box vans to interior racking and drop-sides.

Part of a $30 billion investment by Ford into electrified vehicles, the E-Transit is projected to offer a 217-mile WLTP-certified driving range thanks to a 67 kWh battery pack. Rapid DC charging can achieve a top-up from 15 to 80% in around 34 minutes, while a full charge can be delivered over AC in around 8.2 hours.

Ford suggests the E-Transit can reduce a fleet operator’s cost-of-ownership by approximately 40% compared to internal combustion engine models, thanks to lower maintenance bills.

The new Ford E-Transit will make its UK public debut at this year’s CV Show on 31st August- 2nd September, before going on sale early in 2022.