First Bus has placed an order for 91 double-deck and 35 single-deck electric buses from the partnership between Alexander Dennis Limited (ADL) and BYD UK. The order, part-funded by the Scottish Government through its Ultra Low Emission Bus Scheme, is Scotland’s largest ever electric bus order. 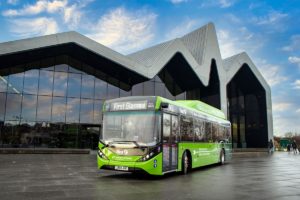 The buses, which will be assembled at ADL’s Falkirk facility and will utilise BYD electric driveline technology, will be introduced to the Glasgow city bus network by March 2023. The new Enviro400EV and Enviro200EV vehicles will join First Bus’s existing fleet of 24. All 150 vehicles will operate from the company’s Caledonia depot and will be charged overnight.

Janette Bell, First Bus managing director said, “As leaders in sustainable mobility, we are fully aligned with the Government’s ambitions for a zero-carbon bus fleet and have already committed to this by 2035. We will continue to ensure that our progress doesn’t just exceed the expectation outlined in the National Bus Strategy, but that it also puts the expectations of our customers front and centre.”