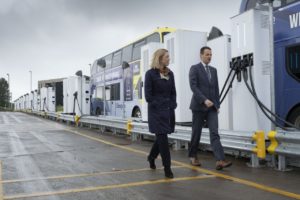 Scottish public transport operator First Bus has finished construction of the rapid EV charging hub in Glasgow that will allow 150 electric buses to be charged at one time.

Trials have already begun at the Caledonia depot, in Glasgow’s southside, with its 160 rapid-charging points being used by third-party businesses during the day when First Bus’s fleet is out on service.

The chargepoints, which took nine months to fit, could be more than doubled if First Bus’s plans for a new substation in partnership with Ofgem and Scottish Power Energy Networks come to fruition, which would supply enough power for an extra 200 charging points.

The Caledonia bus fleet of First Bus is expected to be 50% electric by December 2022, when it takes delivery of a 52 electric buses that will add to the city’s existing fleet of 98 electric buses.

The new rapid-charging stations can fully charge a bus in four hours if required and will be controlled via smart-charging software, ensuring efficient power use and minimised drawdown from the National Grid at peak times.

First Bus plans to replicate this model across many more sites as part of its ambition to be emission-free by 2035.

Duncan Cameron, Managing Director at First Bus Scotland, said: “With the great range of our new EVs, and the immense power of these new charging stations, our buses only need to stop to be charged overnight, allowing us to free up the depot during the day for other electric fleets in and around Glasgow”.