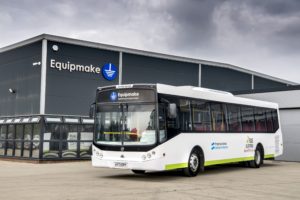 A battery electric bus developed in Norfolk is on its way to Argentina to begin in-service trials ahead of mass manufacturing plans.

Equipmake’s ZED-powered Agrale MT17.0LE, a 12-metre single deck model capable of carrying 70 passengers, will be operated over the next 12 months by the largest bus operator in Buenos Aires, DOTA S.A.

It is set to start in-service running in the Argentine capital before October this year.

Once the trial is complete, the objective is for large-scale manufacture to begin in Buenos Aires, with Brazilian bus manufacturer Agrale and Argentinian coachbuilder Todo Bus.

Equipmake estimates the new electric Agrale MT17.0LE will have a range of up to 150 miles, with the battery able to be recharged at the depot overnight via a CSS2 DC charging point.

The bus was developed as part of the Advanced Propulsion Centre-funded Cost Effective Low Entry Bus project, which aims to deliver a cost-effective bus designed for the South American markets.

Replacing an existing ICE drivetrain, the company’s repower programme involves an inspection of each bus to ensure adaptability.

Each repower is tailored to specific operator requirements, with service routes simulated to ensure the correct battery power level is selected for optimum performance and efficiency, and guaranteed driving ranges of 150 to 250 miles achievable, more than sufficient for a complete duty cycle, allowing buses to be recharged overnight.

“In parallel with the creation of new electric buses, repowering is an important and cost-effective transitionary technology that can bridge the gap between diesel and a new electric bus fleet.”