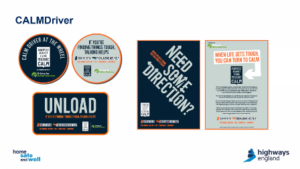 A major new campaign focusing on the mental health of commercial vehicle drivers has been launched.

The CALM Driver is a collaboration between Driving for Better Business, the government-backed Highways England programme, and the Campaign Against Living Miserably (CALM).

It was developed after Statistics from the ONS showed that the suicide rate for van drivers is 25% higher than the national average and 20% higher for truck drivers.  75% of all UK suicides are male, in particular men under 45.

CALM says van and truck drivers of all ages are prone to poor mental health due to unpredictable journey times, traffic congestion, tight deadlines, a high workload, and lack of social interaction which could exacerbate their mental health problems.

As part of the campaign, England Rugby player Joe Marler produced a video message aimed at UK van and truck drivers to support them during these challenging times.

Meanwhile, Driving for Better Business has produced 20,000 driver information packs for employers to place in their vehicles. The packs contain a flyer and stickers to go inside commercial vehicles, making drivers aware of CALM’s free and confidential helpline and webchat for anyone who needs to talk about the issues they are facing.

To help promote the packs to employers, Driving for Better Business commissioned award-winning comedian and mental health advocate John Ryan to write and produce a short video “Man v Van” using humour to impress on drivers that checking their own mental health daily is just as important as checking their vehicle.

Out of the initial production run of 20,000 packs, over half have already been ordered by businesses whose staff drive for work, such as Auto Electrical Services – a small fleet in Newport – and Yodel which has ordered 5,500 vehicle packs for their drivers.

Other supporters of the campaign include the Murphy Group, Bott, and JM Hall Couriers – one of Amazon’s largest delivery service providers. CALM Driver also has the backing of the Road Haulage Association – the UK’s trade organisation for road freight transport – which is promoting the initiative to its members.

Commenting on the campaign, Simon Turner, Campaign Manager, Driving for Better Business said, “With a surge in online retail, there have been increased pressures on drivers to fulfil these extra orders, making their journeys longer and even more alone. These working conditions can increase the likelihood of mental health struggles and suicide. Supporting drivers’ mental health, especially during the COVID-19 pandemic, isn’t just morally the right thing to do, it also makes good business sense, helping to keep operations running smoothly, and drivers safe and healthy.”

Mark Cartwright, Head of Commercial Vehicle Incident Prevention, Highways England said: “Drivers who get behind the wheel when they are exhausted, unwell or distracted by personal issues are less effective and more likely to be involved in an incident; the importance of mental health cannot be underestimated. We urge anyone in this situation – and business leaders – to seek out the support available and we’re grateful to Driving for Better Business and CALM for highlighting this important issue.”

Simon Gunning, CEO, CALM said: “There are 18 deaths by suicide every day in the UK. 75% of those are male, and suicide remains the single biggest killer of men under 45 in the UK. That is unacceptable. We all go through tough times, whether it’s the breakdown of a relationship, losing a job, financial worries, or going through a bereavement. And now more than ever It’s important to know that checking in on yourself and those around you can make a huge difference.”

“CALM has always been present in places where mental health issues often go unrecognised or ignored, we open up the conversation to everyone, we move it forward, tackle taboos and, crucially, stop people from reaching crisis point. That’s why we’re delighted to working with Highways England and Driving for Better Business on the CALM Driver campaign to help people who drive for work. By opening the door to the millions of van and truck drivers up and down the country we can continue to play an important role in challenging the stigma surrounding mental health and suicide, and take another step forward in creating long-term cultural change.”