While the commercial vehicle industry’s gradual movement away from diesel to alternative forms of motive power ahead of 2030 is much vaunted, the refrigerated trailer sector is undergoing a quieter transition. With the requirement to efficiently and safely transport Covid-19 vaccines in strictly controlled environments, the sector has never been more important.

Until recently, temperature-controlled trailers have been heavily reliant on dedicated diesel engines, but a drive towards increased efficiency and sustainability has resulted in the emergence of solutions such as electrification, including hybridisation, solar power and optimising the efficiency of incumbent technology. Changes to UK fuel duty planned for 2022-23, which abolishes the duty-rebated (red) diesel often used for generators, will also impact negatively on fleet costs.

One of the most radical solutions has been recently launched into the UK by Carrier Transicold. Its Vector eCool is, says the company, the

The eCool utilises the company’s E-Drive technology, which captures and stores kinetic energy generated at the trailer’s axle to power the refrigeration unit via a battery pack. The fully autonomous system manages battery recharge cycles to ensure full refrigeration capacity and can also be plugged into a charge point – a full charge is achieved in under four hours. According to Carrier Transicold, a system such as the eCool is also lighter than a traditional diesel generator and full tank of fuel, providing “further reductions in energy consumption.”

Electrified trailer technologies help reduce emissions, but also reduce noise pollution, which is becoming an increasingly salient topic in congested LEZ areas. For example, operating noise of an eCool-equipped large, refrigerated trailer is below 60dB. However, similar benefits can be brought by hybridised units, which help shorten the jump from internal combustion to full electrification.

A further solution from companies such as Thermo King, for example, allows operators to use a diesel generator for refrigeration on long haul, before switching to silent, emissions-free electric power for the last-mile leg.

Electrification technologies are scalable for applications from refrigerated vans suitable for supermarket home-deliveries to multi-wheel tractor units. In fact Tesco has recently announced that it added 30 new zero-emission electric vans equipped with the new Thermo King E-200 refrigeration units to its fleet in 2020. The units offer multi-temperature performance and operate entirely autonomously to optimise charge and discharge cycles.

According to Thermo King’s David O’Gorman, the E-200 units were “designed to bring constant capacity and the intelligent power management needed to exploit the opportunities presented by fully-electric commercial vehicles. By fitting Tesco’s new LDV electric vehicles with the E-200 units, we unlocked low noise and low emission zones to any delivery.”

Being inverter-driven as opposed to from a direct drive from a diesel engine, the E-200 can be utilised with electric or internal combustion powered vehicles. It also allows them to benefit from supplementary technologies, such as solar capture, to optimise power management, ensuring battery condition is not compromised and the draw on stored energy is minimised.

According to UK Thermo King distributor Marshall Fleet Solutions, the increasing need to reduce fleet emissions is “putting pressure on refrigeration equipment manufacturers to launch new and exciting all-electric technologies.” The company does, however, believe that electrification is the long-term answer.

“As a power source, electric is already making great strides,” says Mark Howell, Marshall Fleet Solutions managing director, of how the sector can ‘go electric’. “Finding the answer will depend heavily on developments in technology. That’s because most direct drive solutions for diesel combustion engines include compressors that require engine movement to power the refrigeration unit. The next step is to extend all-electric capabilities to both medium-sized vans and trucks. From increased uptime and utilisation, higher reliability and improved temperature control, to an intelligent algorithm that helps safeguard and optimise the power supply, going electric means gaining a significant boost in performance.”

It is a viewpoint that is echoed by vehicle and trailer manufacturers, with electrification continuing to rise in prominence and the technology advancing rapidly. It has been four years, for instance, since Renault debuted its experimental all electric 13-tonne prototype truck equipped with a Carrier refrigeration unit. At the time, Renault Trucks president, Bruno Blin hailed the project as providing, “the ideal solution for maintaining air quality and reducing congestion in the city centre, because it allows noise-free deliveries to be made during the anti-social hours, maintaining peace and quiet for residents. Because it produces no polluting emissions, this vehicle also helps maintain the area in which the operatives are working.” 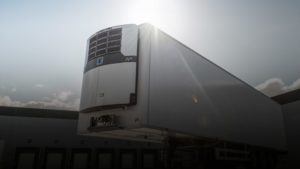 Four years later, the technology is rapidly emerging as the solution for the refrigerated trailer sector. However, in the short- to mid-term there are still great benefits to be released from more traditional methods. For example, this week Carrier Transicold announced the launch of a ‘Trade In – Trade Up’ programme for the sector in the UK. The incentive encourages hauliers to upgrade their single-temperature refrigeration units to benefit from the 30% fuel efficiency improvement offered by latest units.

As a reminder that differing solutions are evolving for common challenges, O’Gorman concludes, “With this programme, Thermo King wants to help transport companies address the impact, which the upcoming changes in fuel duty in the UK will have on their operations.”

Of course, a change to fuel duty is only one of the challenges posed to the sector. The increased focus on refrigerated trailer units, inspired by growing popularity of home-deliveries during Covid-19, is intensified by logistical challenges during the vaccine rollout. Cold storage companies, logistics operators and supermarkets have offered use of their refrigerated fleets to help facilitate vaccine transportation as the country rallies in its fight against the pandemic.