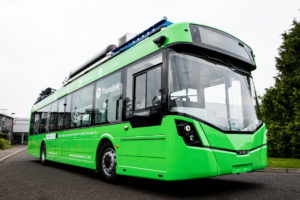 This week the UK government outlined its strategy to reach net zero carbon emissions including an additional £350 million to support the electrification of UK vehicles and their supply chains.

However, even before the latest announcement a series of schemes and policy decisions had been put in place to help local authorities and operators make the switch to zero emission buses.

The Department for Transport’s £120m Zero Emission Bus Regional Areas (ZEBRA) scheme, launched in March, has allowed local areas to bid for funding to purchase zero emission buses, as well as the infrastructure needed to support them.

Under the scheme Cambridgeshire and Peterborough Combined Authority (CBCA) is asking for £4.3m to part-fund 30 battery-electric double-deckers for Cambridge.

The government is expected to award the first tranche of funding to the authorities that produce the strongest business cases, early in 2022.

Roads minister Baroness Vere said: “The £120m to roll out zero emission buses will have a profoundly positive effect on our towns and cities, lowering emissions, improving air quality and reducing noise pollution.”

In March the Scottish Government announced it would be making £40.5 million available through a second round of the Scottish Ultra-Low Emission Bus Scheme (SULEBS).

It is the largest SULEBS investment yet and will help replace 215 old diesel buses with new battery-electric models.

This new funding builds on the first round of the Ultra-Low Emission Bus Scheme that Scotland launched in August 2020.

The grants cover up to 50% of the cost difference between an ultra-low emission bus and a conventional diesel equivalent. That figure rises to up to 75% depending on the zero-emission capability of the bus.

A total of 172 of these new buses will be manufactured at the Alexander Dennis plant in Falkirk.

Paul Davies, Alexander Dennis President & Managing Director said: “The Scottish Government deserves huge credit for leading by example to support bus operator’s commitment to invest in cleaner, greener buses and we are delighted that bids for 172 of our electric buses have been successful.”

Its GB Kite Hydroliner has a range of up to 640 miles while the GB Kite Electroliner up to 300 miles on a single charge, the fastest charging version can be charged in just 2.5 hours.

They also share an 86% parts commonality with their Double Deck sisters which delivers benefits to operators in terms of reducing complexity and costs for fleet maintenance.

The buses are expected to go into production in the first quarter of 2022.

Jo Bamford, Wrightbus Executive Chairman said: “The funding from the ARMD competition has been invaluable in allowing us to develop the technology for our two new zero-emission single-decks at considerable pace.

“The creation of our new single-deck hydrogen and single-deck electric battery buses means Wrightbus is proud to be the only UK manufacturer currently able to offer four zero-emission vehicles to the market – which include the Hydroliner, the first hydrogen double decker bus in the world.”

ARMD has been specifically designed to encourage UK industry to restart R&D and to help accelerate current projects post the Covid-19 pandemic in the transition to zero emission vehicles.

Meanwhile, some firms have relied on traditional bank loans to source new electric buses, with lenders keen to be associated with green projects. 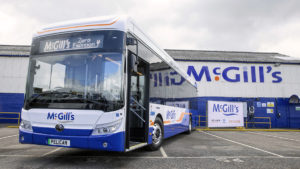 Pelican was able to source another 129 electric buses in the third quarter of 2021 through a £30m funding package from HSBC UK.

Rob King, HSBC UK’s head of sustainable finance, said: “HSBC has pledged to achieve net zero from our financed portfolio by 2050 and has committed to working with all our clients to help them on their journey to net zero.

“Pelican is a great example of this. We are delighted that the buses will also form part of the COP26 event. Supporting innovations such as this will also help the UK as a whole in the transition to a lower carbon economy.”

Another key reason for the uptake in EVs has been the decision by big cities, including London to transition their bus fleets to electric and change their procurement policies away from diesels and hybrids.

Transport for London (TfL) says all new buses it now orders are now only battery and hydrogen-powered vehicles and that its goal of a zero-emission bus fleet in the capital will now be achieved by 2034, three years earlier than previously planned.

Operator RATP Dev London recently placed an order for 68 BYD ADL Enviro200EV single deck buses and 127 BYD ADL Enviro400EV double-deckers to be based in the west of the capital.

The company will be the largest operator of electric buses in London by the beginning of 2022, with close to 25% of its fleet fully electric. 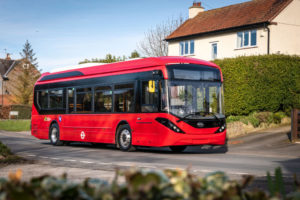 Catherine Chardon, Managing Director of RATP Dev London, said, “Electrification is a critical part of our business and partnership with Transport for London (TfL).

“By the beginning of 2022, we will operate 15 zero emission routes and have five of our garages converted to electric.”

According to independent advisory firm Accuracy, the UK’s electric bus fleet is set to be the largest in Europe by 2024.

The availability of various schemes set up to promote the uptake of electric buses and the new funds promised by the government this week should ensure that the country stays at the forefront of the transition for the foreseeable future.