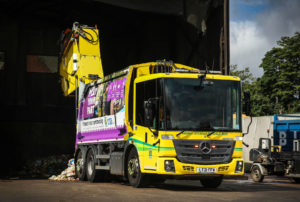 West Hertfordshire’s Dacorum Borough Council has added a further 14 Econic refuse collection vehicles to the 11 it commissioned in January 2020.

All 25 trucks were supplied by S & B Commercials and have joined the council’s fleet of 32 refuse collection vehicles which is now dominated by Mercedes-Benz.

Most of the refuse vehicles are based at the council’s headquarters in Hemel Hempstead, with a smaller number working from a depot at Tring.

Like their predecessors, its latest Econics are 2630LL models, in 6×2 rear-steer configuration.

These bodies offer a smart solution for modern waste management by providing two sealed compartments that can be operated independently, preventing any cross-contamination.

The Econics are also equipped with ISS four-camera video systems, which have live-view and recording functions, and Cyclear detectors to warn drivers of the presence of vulnerable road users on the nearside.

Those trucks that have been in service since last year have single-compartment Geesinknorba GPM IV compactors and Combi Split bin lifts.

Simon Smith, Dacorum Borough Council Transport Manager, said: “We undertook a thorough evaluation of the various products on the market and trialled demonstrators by several suppliers.

“The package from Mercedes-Benz and Geesinknorba gave us everything we wanted, and at a competitive price, with the promise of timely, customer-focused aftersales support should we need it.”