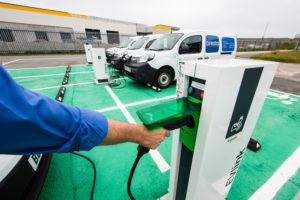 The Government’s decision to cut the van and truck plug-in grant has been criticised by leading figures in the commercial vehicle sector.

It will be available for the first 250 orders placed. Grants at the £16,000 rate are also limited to ten per customer. After the 250-order limit is reached, a maximum grant rate of £6,000 will apply.

The eligibility has also changed, meaning that to qualify, all vehicles must be able to travel at least 60 miles without any emissions at all, so now only the BD Auto eDucato, Fuso eCanter and the Paneltex Z75 qualify.

You can check the low-emission vehicles eligible for a plug-in grant here: https://www.gov.uk/plug-in-car-van-grants

The plug-in van grant criteria for small vans states they should be less than 2,500kg gross vehicle weight, have CO2 emissions of less than 50g/km and can travel at least 60 miles without any emissions.

Eligible vehicles include, The plug-in van grant criteria for large vans says vehicles should be between 2,500kg and 3,500kg gross vehicle weight, have CO2 emissions of less than 50g/km and travel at least 96km (60 miles) without any emissions.

The Government has also cut the plug-in car grant from £3,000 to £2,500 and excluded models that cost more than £35,000. The plug-in vehicle grant scheme was also cut in the Budget last year. It was originally introduced in 2011 and has supported the purchase of 285,000 vehicles to date.

Transport minister Rachel Maclean said: “The increasing choice of new vehicles, growing demand from customers and rapidly rising number of charge points mean that, while the level of funding remains as high as ever, given soaring demand, we are refocusing our vehicle grants on the more affordable zero emission vehicles – where most consumers will be looking and where taxpayers’ money will make more of a difference. We will continue to review the grant as the market grows.”

However, the CV sector is worried that such a move will slow down EV uptake.

Mike Hawes, SMMT Chief Executive, said, “The decision to slash the Plug-in Car Grant and Van & Truck Grant is the wrong move at the wrong time. New battery electric technology is more expensive than conventional engines and incentives are essential in making these vehicles affordable to the customer.

“Cutting the grant and eligibility moves the UK even further behind other markets, markets which are increasing their support, making it yet more difficult for the UK to get sufficient supply. This sends the wrong message to the consumer, especially private customers, and to an industry challenged to meet the Government’s ambition to be a world leader in the transition to zero emission mobility.

The British Vehicle Rental and Leasing Association (BVRLA), which represents more than 970 companies engaged in vehicle rental, leasing and fleet management, was disappointed by the decision.

BVRLA chief executive Gerry Keaney said, “This will come as a particular blow for the commercial vehicles sector, where BVRLA members have been working so hard to drive uptake of electric vans and trucks.

“Coming just months before the UN’s climate change COP 26 summit and as other countries are increasing their zero emission subsidies, this move could also have a big impact on the supply of electric vehicles coming into the UK.

“Given the surge in battery vehicle adoption, it makes sense for the Government to reconsider where and how it uses grants and incentives, but this move is poorly timed and will slow down the transition to zero emission motoring.

“Confidence in electric vehicles and running costs is fragile, so slashing the grants and eligibility criteria will put a brake on the fantastic market momentum we have seen in recent months.”

Mark Barrett, General Manager, Harris MAXUS, said, “This is a retrograde step by the Government that comes without any warning and at a time when incentives are vital to encouraging drivers and fleet buyers to make the switch to greener motoring.

“If we are to move to a zero-emission market, significant government support is needed given the current higher cost of EV vehicles. A lower EV grant has the potential to stall the good progress being made in meeting the targets and deadlines that have been set to achieve a zero-emission market.

“There is a growing range of EV vans in the market and many tenders in process waiting to be awarded. This move by government will alter the dynamic of commercial fleet tenders for which price is a huge factor and may now result in fleet buyers delaying the move to electric.”