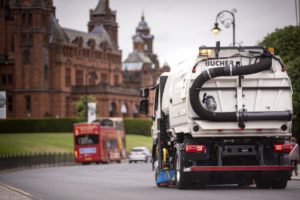 The pressure of adhering to stringent legislation regarding the control of emissions, especially in and around Low Emission Zones (LEZ), will continue to build as 2030 nears. Councils, such as the City of Edinburgh, are outlining their own green visions centred on sustainability plans with the ultimate aim of net-zero carbon emissions. Replacement of Council fleets plays a huge role in achieving such goals, including the phasing out of municipal vehicles in favour of more efficient alternatives.

While it aims to switch to entirely electric car and van fleets by the end of 2020 and by 2023 respectively, interestingly – as part of a longer-term replacement of its municipal operations – the City of Edinburgh Council has already begun operating the UK’s first entirely electric road sweeper. Manufactured in Dorking by Bucher Municipal, the V65e will, says the council, save £18,000 a year in fuel when compared to a diesel alternative and reduce emissions by 110kg of CO2 per day.

The vehicle offers a 6-tonne payload and a range of more than 120 miles, ensuring that a day’s work can be completed on a single overnight charge at its Council depot, verified by extensive real-world testing and Edinburgh’s initial experiences. However, due to a number of technical innovations, the sweeper’s green credentials include more than a switch to electric motive power.

“We spent 18 months optimising the efficiency of the fan system using simulation tools such as Computational Fluid Dynamics (CFD) to study air flow and energy use,” explains Gareth Knopp, Bucher Municipal innovation and simulation manager – truck mounted sweepers, of the company’s desire to optimise the sweeper’s energy use to ensure that range anxiety would never been an issue in regular operation. “CFD was used to optimise the fan system to run at a slower speed than before while achieving the same airflow and pickup. The fan system now offers a 20% saving on energy usage and most municipal users will only require around 20-30% of available power to perform the standard of clean required.” 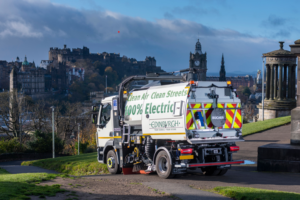 Replacing diesel engines with electric power provides a significant reduction in noise pollution, which is valuable given the urban areas and often unsociable hours worked by road sweepers. The majority of that saving is in transit while running on quiet electric power, says Knopp, as the greatest operational noise of any working sweeper is the sound of the fans. However, with the new fan system working less hard than on traditional vehicles, there is a saving to be made even in hardest use cases.

Incorporation of a new fan system was comparatively straightforward when compared to the challenges posed by the electric driveline and architecture. A 200kWh battery is mounted behind the cab and will provide ample charge for an 8-hour working day. The company opted for a Lithium Ferrophosphate (LFP) battery due to being less thermally reactive than Lithium Nickel Manganese Cobalt Oxide (NMC), offering a more robust, durable option, at the cost of power density – a battery management system monitors temperature and battery cell condition, negating the need for a complex and potentially bulky liquid cooling system.

The LFP battery also offers a longer life cycle than alternatives, reducing the risk of declining capacity in 5 years’ time, for example, and lowering the total cost of ownership by pushing back the need for battery replacement.

Removal of two large, heavy diesel motors from the road sweeper chassis (one to power the vehicle and another for the pick-up system) offsets additional battery weight. This, combined with the way road fund licence fees are calculated for commercial vehicles on weight versus EVs, means that the V65e is able to operate with an increased gross weight when compared to a traditional 15-tonne diesel DAF sweeper – also enabling operation with an increased payload when compared to a diesel variant on the same chassis.

“We have carried out significant testing for our local Mole Valley District Council, collecting seven tonnes of debris a day and returning to the depot having used around 80% charge, including two trips to the waste and recycling centre – around 60-70 miles a day in permanent sweeping mode,” says Knopp. “Packaging of the EV drivetrain and battery was challenging due to the lack of a dedicated EV chassis. Battery packs would normally be fitted low down along the sides in most applications, but for a road sweeper this space is used for the road-cleaning equipment. We used an existing DAF chassis as the best basis for conversion – a road sweeper has a short wheelbase for manoeuvrability and we didn’t want to lose that.” 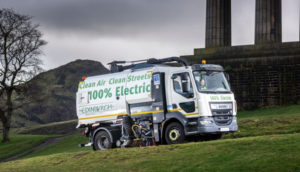 Bucher Municipal states that Covid-19 has delayed a number of EV adoption programmes, but that the electric sweepers have completed an 8-week trial in London ahead of future deliveries for areas including Westminster.

“We’re glad to be an early adopter of the technology,” says Councillor Lesley Macinnes, Transport and Environment Convener, after City of Edinburgh Council purchased the sweeper through grant funding from the Scottish Government’s Switched on Fleets initiative. “Our 2050 Edinburgh City Vision is of a green, thriving and carbon neutral city and it is actions like this, along with our commitment to deliver an electrified transport fleet, that will help us achieve that vision.”

“We have active projects researching autonomous functions,” Knopp concludes, “and are working with Harper Adams University to use artificial intelligence and machine learning to further improve efficiency and optimise settings and functionality – for example, future improvements could include entire route planning for a fleet of EVs.”