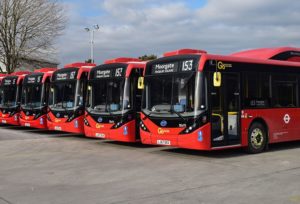 A total of 42 charge points are now in operation at Camberwell Garage in South-East London, thanks to new electric vehicle charge points from UK Power Networks.

The electricity firm worked with bus operator, Go-Ahead, to introduce the chargers that will provide power for zero emission buses.

These buses will serve route 100 (St Pauls to Shadwell), 360 (Elephant and Castle to Albert Hall) and 484 (Denmark Hill to Lewisham).

They will charge overnight and help alleviate air pollution hotspots in the city, representing a further expansion of what is one of Europe’s largest electric bus fleets.

UK Power Networks, which operates across London, the South East and East of England, has helped replace more than 500 diesel buses with new electric buses as part of its effort to meet the Government’s 2050 target of net zero emissions.

Richard Harrington, director at Go-Ahead London, said: “As the capital’s largest bus company, and the UK’s biggest individual e-bus operator, we are at the forefront of zero-emission technology.

“Go-Ahead London and UK Power Networks have worked seamlessly to deliver electric bus infrastructure at the 107-year-old Camberwell Garage and, in the process, improve air quality for the local communities we serve on Routes 100, 360 and 484.”

Irvine Nyamapfene, project manager at UK Power Networks, added: “By enabling more buses to run on electricity instead of diesel, we bring another breath of fresh air for Londoners and we are pleased to be playing our part as the city looks forward to a greener future.”