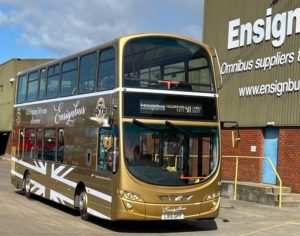 Michelin will fit both new and Remix urban bus tyres, predominantly from the Michelin X InCity range, while its on-site technicians will maintain the tyres according to a multi-life policy.

This will involve regrooving worn tyres once the tread depth reaches 3mm to 4mm, extending the lifetime of Ensignbus’s tyres in their most fuel-efficient state.

Once the regrooved tyres have worn, they will be retreaded at Michelin’s Remix plant in Stoke-on-Trent, doubling the casing lifespan.

As well as running 13 separate routes within the borough of Thurrock, Ensignbus is also a bus dealer, supplying new and second-hand vehicles to many of the UK’s largest bus and coach operators.

The company, which is celebrating its 50th anniversary this year, has exclusively used Michelin tyres for many years, citing the high standards of services and products as the main reasons for its decision.

“It is a very sensible and flexible relationship that allows us to make the most of every tyre we have,” said Ross Newman, Operations Director at Ensignbus.

“A lot of the second-hand vehicles we buy come in on Michelin. Our contract allows us to return them to Stoke for retreading and for those tyres to be fitted back onto our own main fleet of operational vehicles if we need to.”