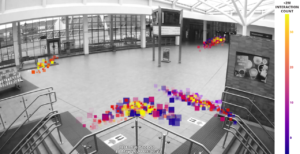 Today they head one of the automotive industry’s most exciting tech companies, Humanising Autonomy, which is helping vehicle manufacturers make self-driving vehicles a reality.

Publicly associated with World Economic Forum and the European Commission (ARCADE) program, Humanising Autonomy is recognised around the world.

The company’s groundbreaking Artificial Intelligence technology helps vehicles make sense of their surroundings and ensures they’re able to interact safely with all road users and in all environments.

TNB: Tell us a bit about Humanising Autonomy and how it got started.

LN: Humanising Autonomy was founded three years ago by myself and my friends, Maya Pindeus, our CEO, and Raunaq Bose, our CTO, after we graduated from Imperial College.

We actually won our first automotive clients in the same month we founded the company and that was a big motivation for us to build further.

We’re based in London and at the moment we have 30 employees but we’re growing quickly.

TNB: And could you give us a snapshot of what the company does exactly?

LN: We’re a predictive AI company. Our goal is to build the global standard for human-machine interactions. In layman’s terms, that’s how people interact with machines in any environment.

The way we do that is by capturing human behaviour in a powerful prediction engine. In essence, that’s software that gives you real time understanding of the behaviours of people in the streets.

That same software is in use in AI systems and safety systems for drivers such as forward collision warning and blind spot monitoring.

And it’s also in use in automotive vehicles for patterning, so basically helping autonomous vehicles drive through complex cities, which was a massive hurdle for most of these vehicles because they were trained on Silicon Valley highways, not Soho on a Friday night. That’s much more challenging.

LN: Traditionally there’s been quite a lot of focus on drivers and increasing their comfort but what’s been missing, and this is one of the big reasons we founded, was interaction with people outside.

And what is often forgotten is that there are lots of different types of pedestrians and road users – cyclists, people walking and running, people in wheelchairs, children and people on e-scooters – and for a human driver that’s very straightforward.

TNB: What  differentiates Humanising Autonomy from other companies in the same field?

LN: I think it’s the human approach. A lot of systems focus on preventing harm to the vehicle and its occupants but the effect of an accident on people outside the vehicle has the potential to be much larger.

And I think we’re much more tuned into the social environment where the focus is as much on accidents with vulnerable road users as it is on the safety of occupants of the vehicles.

That’s where we’ve really been focused since day one.

TNB: How’s your technology being used in the development of autonomous commercial and public transport vehicles?

LN: This is actually one of the big things we’re working on at the moment with Arriva and Transport for London and they’re using our technology to warn bus drivers of what’s happening in their blind spots.

Your readers will have heard of the Vision Zero efforts that are occupying the minds of many cities and public transport operators.

Our system means that even if a bus driver misses a certain blind spot area or doesn’t look in their mirror, they would be warned that there’s something there that they need to be aware of.

TNB: And will this technology be of enormous benefit to commercial vehicles operating in busy urban environments?

LN: Absolutely. Especially trucks which can find it very difficult to navigate through narrow streets and this is where more collisions with pedestrians and cyclists tend to occur. Here you have a very ambiguous street scenario where people, cyclists, scooters are all buzzing about like a shoal of fish and it can be impossible for even a human driver to understand what’s going on. This is where our AI will be able to make a real difference.

TNB: And how do you see things developing in future?

LN: Safety is the big issue we need to tackle first but beyond that there’s huge potential. For example, this AI can play a big part in helping fleets make efficiency gains. If their vehicles aren’t having to brake suddenly because they have enough advance warning of what cars and pedestrians up ahead are going to do, it can really help to save on fuel. It will also be able to help operators reduce journey times.

In the future it will also help with all sorts of new vehicle interactions. So, for example, let’s say you have an autonomous Uber – it will know that its next passenger is in a wheelchair and that it needs to extend a ramp and lower itself when there’s no human driver there to assist.

When it comes to commercial vehicles there are many more ways the technology will help, such as how vehicles are autonomously loaded and unloaded, and how they interact with robotic arms etc.

One of the most fun things we do as a company is try to come up with all these new interactions between humans and vehicles in the future.