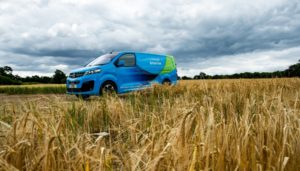 Just weeks after clocking up the UK’s biggest ever single order for electric commercial vehicles, the British-built Vauxhall Vivaro-e has enjoyed more success.

Openreach, one of the nation’s largest fleet operators, has placed an order for 270 of the fully-electric panel vans to replace diesel versions currently on its books.

The order came shortly after the UK Electric Fleets Coalition, of which Openreach is a founding member, called on the government to set a target for 100% of all new car and van sales to be fully electric, wherever possible, by 2030.

In a huge boost for Vauxhall’s historic Luton plant where the Vivaro is made, it came just weeks after British Gas placed a record-breaking order for 1,000 units.

It also comes with an eight-year/100,000-mile battery warranty designed to reassure fleet customers in addition to an eight-year Roadside Assistance package.

James Taylor, General Sales Director of Vauxhall, said, “Our electric vehicles help achieve significant cost savings from day one, and equally as important have no compromise in capability.

“Having one of the UK’s largest fleet operators choosing our electric vehicles shows just how confident they are in our product. We are very happy to continue our partnership with Openreach, transforming their nationwide fleet with our new electric vehicles.”

Clive Selley, Openreach CEO said, “This order is an important first step as we begin to move our fleet, the second largest commercial fleet in the UK, to being fully electric.”