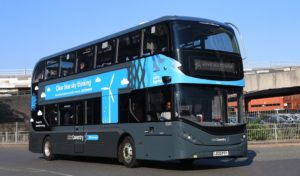 National Express Coventry will roll out more than 130 British-built fully electric double-deck buses as part of plans to give the West Midlands the UK’s first zero-carbon bus network.

The Enviro400EV double deckers, manufactured in partnership between Alexander Dennis and BYD, will be put into operation in Coventry from 2023 as the city’s bus operator aims to replace its 300 diesel vehicles by 2025.

Zenobē and National Express will partly finance the project, with another £50m in ringfenced grant funding from the Department of Transport, awarded to the West Midlands Combined Authority.

Alexander Dennis will also supply Zenobē and National Express with spare parts for planned preventive maintenance over a 16-year period.

Steven Meersman, Co-founder and Director of Zenobē, added: “By retaining ownership of the vehicles and taking on the risk of switching to zero-emission, we are giving National Express the use of an electric bus fleet without the hassle of owning one.”