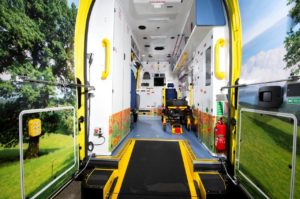 In the final part of our body converters series, TNB looks at the incredibly diverse blue light sector. From police vehicles including cell vans for prisoner transport and protected personnel carriers, to the ambulance, fire and rescue services, the sector poses bodybuilders with highly nuanced challenges, combining the industry-wide goal of reducing emissions with performance, security and safety

Ford’s Project Siren represents the quest to reduce emissions and operating costs, and the continued evolution of vehicles across the CV sector. Developed during the pandemic in an accelerated timeframe of just six months using the agile sprint process – which helps to address critical business decisions through rapid design, prototyping and testing – the project is designed to re-establish Ford’s presence in the UK ambulance market. Based on a Transit chassis cab, the body and conversion built by Venari Group enables the vehicle to perform the role of a frontline ambulance – while fully compliant with the national specification – within a 3.5-tonne gross vehicle weight. The majority of UK ambulances weigh between 4.25 and 5 tonnes, with the added weight naturally making them less fuel efficient.

CEO of Venari Group, Oliver North, claimed that the project would provide “a step change in design” for emergency services in meeting the complex requirements of the Carter Report without compromising durability or vehicle functionality. One of the ways this has been achieved has been through co-creating the vehicle chassis to incorporate emergency vehicle-specific functionality where possible, such as door closures and sensors, as opposed to converting a standard chassis. The companies claim that advanced digital connectivity enables efficient vehicle stocking while the reduced weight decreases emissions and operating costs.

The manufacturer also states that the vehicle, which is due to enter into production now, is fully compatible with all-electric drivetrains. Some such vehicles are already in operation in parts of the UK. 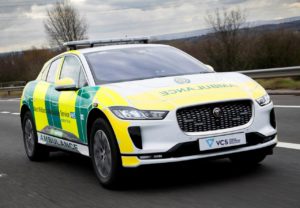 The UK’s first all-electric frontline ambulance was launched by VCS late last year. Operated by West Midlands Ambulance Service, the Electric Dual Crewed Ambulance (E-DCA) is powered by lithium-ion batteries installed beneath the ambulance’s floor. This provides a lower centre of gravity, a top speed of 75mph and a range of 105-110 miles on a 4.25-hour charge.

Anthony Marsh, West Midlands Ambulance Service University NHS Foundation Trust chief executive, says, “By using aircraft-style technology we have created the most hi-tech and lightest ambulances in the country, which reduces our impact on the environment by reducing CO2 levels and ensures that patients receive the highest standards of safety and comfort. It is a logical next step for us to be the first ambulance service in the country to introduce a fully electric ambulance. Given we operate in a clean air zone like Birmingham, this is a sensible and advantageous step forward for so many reasons.”

“As the world moves away from fossil fuels and towards a zero-carbon future, it’s important that the emergency services sector keeps pace,” says VCS managing director, Mark Kerrigan, with a nod to his company’s development of a hydrogen-powered alternative and also a Jaguar I-PACE Rapid Response Vehicle (RRV).

VCS’ hydrogen fuel cell ambulance is the first of its kind in the UK and will operate in London by autumn this year. Now in the latter prototyping stage, the ZERRO (Zero Emission Rapid Response Operations ambulance) body is built using the same Core Capture lightweighting construction method as its all-electric stablemate. They both include a low level access floor for easier patient access, which negates the need for additional heavy lifting equipment.

“As new technologies, such as hydrogen fuel cells, are piloted in the ambulance service, I’m delighted that VCS can be relied upon for its high-quality, ultra-lightweight conversion capabilities,” concludes Kerrigan.

The drive for alternative powertrains has also recently been addressed by the fire service: Emergency One launched the world’s first electric fire engine just six months ago. Built in Cumnock and supported by Scottish Enterprise, the E1 EV0 uses a configurable 280kWh battery pack as its source of motive and water hose pump power. Built on a 16-tonne chassis with a crew cab, the E1 EV0’s electric motor provides 350kW of power and a 200-mile range achievable from a 100% rapid charge in under 2 hours. It features regenerative braking and solar technologies, water capacity of 1750 litres, a modular stowage system and a cab filtration system that removes harmful carcinogens and Covid-19 particulates.

Scottish Enterprise awarded the project a £500,000 R&D grant, as part of a wider £1.7m investment. Linda Hanna, interim CE at Scottish Enterprise says, “Emergency One is a fantastic example of a Scottish manufacturer with export ambitions. We want to inspire more businesses to explore innovation, sustainability and exporting because we know this will help both their business recovery and Scotland’s green economic recovery.”

For the fire service, alternative powertrain complements advancements to traditional equipment. For instance, Articulating Turntable Ladder Appliances now extend to 42 metres and are supported by wide-ranging digital technologies. Operation of the Magirus M42 L-AS (with a 500kg lifting capacity) as fitted to vehicles for Greater Manchester Fire & Rescue Service (GMFRS) and Northern Ireland Fire & Rescue Service (NIFRS) among others, for example, is enhanced by a 360o view to aid touch down of foot plates, plus a low-level jacking system and for efficient operation and floodlights to improve operational safety.

Opportunities also exist for the police force to integrate digital technologies, alongside bespoke requirements such as extra steel work, flip-down guard grilles and impact interior linings for 4.5-tonne protected personnel carriers, or racking and divides for scene-of-crime and forensic vehicles.

Philip Handschin, technical consultant, VNC Automotive, says “We’re already seeing a focus on app-based solutions, but there is now a shift towards exploring how technology including remote control functionality, the relaying of remote surveillance footage to a vehicle’s dashboard and even augmented reality.

“The benefits that augmented reality can provide are obvious when considering navigation, call status and database information. It also means the driver need not take their eye off the road, and can make decisions with fewer distractions,” he adds. 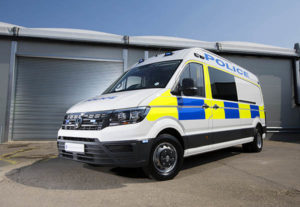 The company also states that many police and responder services are already moving to smartphones and away from separate items of equipment. This can boost officer efficiency, but can also be integrated into the vehicle to provide options such as automatic locking when away from the vehicle – such as when in pursuit on foot – the ability to activate remote functions like sirens, cameras and PA systems, or even transmit location information in an emergency.