Hydrotreated Vegetable Oil (HVO) fuel is a biofuel and diesel replacement made from 100% renewable raw materials such as waste and residue oils, offering net greenhouse gas reductions of up to 90% in comparison with fossil diesel fuel.

Some transport operators believe it can play an important role in reducing greenhouse gas emissions until electric vehicle infrastructure improves and more long-term solutions such as hydrogen fuel become available. 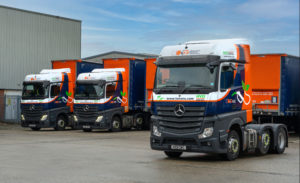 In one example, the Andover depot of Howard Tenens has switched all its HGVs from diesel to HVO with the support of its key clients Abel & Cole, Mole Valley Farmers and Williams & Co.

Howard Tenens, based in Stroud, undertook a review of alternative fuels and chose HVO due to its carbon savings without any need for vehicle modifications.

Green Biofuels (GBF), the largest provider of HVOs, part owned by BP, is supplying the Andover site with one million litres of HVO, sourced entirely from waste oils and fats, every year.

Howard Tenens has calculated that by switching to HVO, its HGVs will emit 92% less CO2 than when running on retail diesel, delivering a saving of 2,873 tonnes of CO2 a year, and a 17% cut in the company’s carbon footprint.

It is now planning to look at other depots where a similar partnership approach can be adopted.

Jamie Hartles, Chief Executive Officer of Howard Tenens Logistics, said: “As carbon reduction is a priority for our customers as well as our ourselves, we took the initiative to act now in switching to a sustainable fuel which would create an immediate positive impact for both parties, rather than wait until electric and fuel cell vehicle technologies become available.”

Travis Perkins has also worked with GBF since last November on its trial of HVO as a replacement fuel for diesel in its vehicles.

It initially involved the installation of one HVO fuel tank in each of the Group’s merchant businesses, including the Travis Perkins merchant, civils specialist Keyline, heating solutions provider BSS and insulator CCF.

Following the success of the trial, Travis Perkins is now scaling up its use of HVO to cover 30 branches and support more than 200 vehicles by this summer. 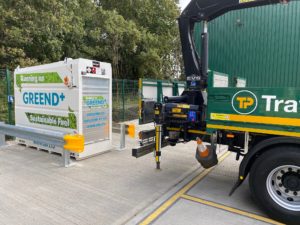 Its HVO is sustainably sourced from waste including used cooking oils and has the potential to reduce carbon dioxide by up to 90% compared with diesel.

According to Travis Perkins, HVO also has the potential to reduce other emissions including nitrogen oxide by up to 30% and particulates by up to 85%, and requires no modification to existing diesel engines.

“We have published clear roadmaps for the delivery of our (decarbonisation) plans, and HVO is a stepping stone in the implementation of our net zero carbon delivery,” said Alan Williams, Travis Perkins CFO.

“It complements the multiple initiatives we are putting in place to decarbonise our business so that we can start to offer zero-emission deliveries to our customers more quickly.”

Meanwhile, tools and equipment provider Speedy is also fuelling its delivery fleet with HVO, helping it save the equivalent of 5,000 tonnes of CO2 over the next 12 months.

Speedy is using Green D+ enhanced HVO as its preferred fuel, which also removes 11% of Nitrogen Oxide emissions and is 20% lower in particulates than standard HVO.

The company is using the enhanced HVO across its trucks and tankers based at 21 locations across Britain, representing 92% of its HGV fleet.

Speedy says the move to HVO means it will not have to retire diesel-powered assets while electric and hydrogen technologies continue to be advanced and matured.

Mike DeRome, Head of Fuel at Speedy, said: “Our fuel usage comprises the largest part of the business’ carbon footprint, making it a priority area for us to take action.

“Reducing emissions in our delivery fleet helps customers to make big gains in decarbonising their supply chain, reducing the overall carbon footprint of their projects.”

Another company using Green D+ HVO is Evri, formerly Hermes UK, which is currently trialling the fuel in the HGV fleet at its site in Brooklands, Surrey.

The firms says an important factor behind the move is that Green D+ HVO can be used in standard diesel vehicles without any modifications, and the fuels can be mixed so tanks do not need to be cleaned if they need to switch back to diesel.

David Landy, Head of Fleet at Evri, said: “At Evri we are currently using Compressed Natural Gas (CNG) vehicles for our first mile, client collections and trunking and have been investing in electric vehicles for the ParcelShop [final mile] fleet. 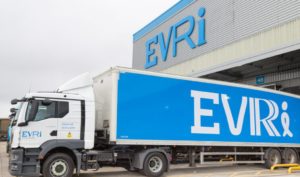 “Middle mile has been the tricky one to get right. We have trialled the 12t CNG and continue to look at that as an option as well as electric vehicles.

“Green D+ HVO isn’t widely available and there’s a limited supply so it isn’t possible to run our entire fleet from this fuel but, subject to this trial, we believe it will be a viable option to help support our sustainable delivery commitments.”

ASCO has switched about 100 HGVs from diesel to HVO as part of its drive to decarbonise its operations and be net-zero by 2040.

The firm said it expects to reduce direct carbon emissions by more than 3,040 tonnes, representing a 46% reduction in the UK against its 2019 baseline.

Its 100% biofuel is produced from non-food crops, ensuring the biomass is not in direct competition with food growth.

“With the support of our clients, we can work towards decarbonising our operations and support the industry to deliver a sustainable future.”

Because of the success of transport operators running their vehicles on HVO, it is clear that the renewable fuel, which provides immediate emissions savings, can play an important role in decarbonising UK transport.