As part of TNB’s month-long focus on alternative fuels, this week we consider natural gas and biomethane.

As one of the earth’s resources, compressed natural gas (CNG) is by definition a fossil fuel, albeit an abundant resource with a lower carbon content than other fossil fuels. Biomethane, on the other hand, is a renewable fuel that is compatible with CNG vehicles and developed through processes such as anaerobic digestion: generating energy from waste, capturing gasses created through decomposition at landfill or from feedstocks.

Both are impactful methods of reducing fleet emissions and working towards a net zero ambition. According to figures from Iveco, which has manufactured around 25,000 natural gas engines since 1996 though its Natural Power range, biomethane has the potential to reduce CO2 figures by up to 95%. The combustion of natural gas, especially biomethane, almost eradicates the generation of harmful greenhouse gases such as CO2, nitrogen oxide and carbon monoxide. The company also states that engines running on the fuel are 50% quieter than similarly powered diesel alternatives.

Gas-powered commercial vehicles are also available from manufacturers including Volkswagen, Mercedes-Benz, Scania, DAF, Volvo and MAN, and cover vans to large trucks and the bus and coach sector. Additional benefits of operating a gas-powered fleet include the ease and safety of transporting the fuel in tankers or through the gas grid as compressed or liquified natural gas, and that the government has frozen gas fuel duty at half that of diesel until 2032. 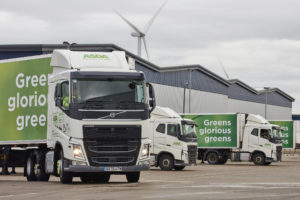 Supermarkets were some of the earliest technology adopters, with Waitrose operating dual-fuel gas and diesel trucks as part of its fleet since 2013 and purely CNG-powered vehicles since 2015. The grocer has committed to running its entire 500-plus heavy goods fleet on biomethane by 2028 and removing all fossil fuels from its fleet by 2030 as part of the John Lewis Partnership’s ambition to achieve net zero by 2035. In conjunction with Air Liquide, Waitrose has also built its first onsite biomethane filling station and the company states that conversion of the HGV fleet would save 49,000 tonnes of CO2 every year: the equivalent carbon footprint of over 6,000 UK households.

“Five biomethane trucks produce the same emissions as one diesel lorry and they are also much quieter, helping reduce not only greenhouse gas emissions and air pollution but also noise pollution in our cities,” said general manager of central transport at John Lewis Partnership, Justin Laney. “We have been pioneering the adoption of long-distance biomethane trucks in the UK and scaling this up to our entire heavy truck fleet will deliver significant environmental and operational benefits.”

Ocado recently expanded its CNG fleet with an additional 20 Iveco Stralis NP units and, as part of its ambition to transition its 1,000-unit core fleet from diesel to gas by 2024, ASDA has received an additional 202 Volvo FH LNG units. The Volvo trucks have been developed to run on liquified natural gas (LNG), which reduces emissions compared to a diesel powertrain and provides long haul viability – LNG compresses in volume when stored below -162oC, making it easier to carry large volumes of fuel.

Enhancing the sustainability aspect of gas-fuelled trucks, the majority of ASDA’s order will remain in service until January 2026 – 12 months longer than its fleet’s usual diesel replacement cycle, improving return on investment.

“We began with a pair of Volvo FH LNG trial vehicles at our Avonmouth depot in December 2018, which quickly proved to be very capable,” explained Sean Clifton, National Fleets senior manager. “A further 49 joined between December 2019 and May 2020; and now this latest order sees an additional 202 Volvos being deployed across five additional sites in our network.”

Ocado’s fleet has already covered more than seven million CNG-fuelled miles and was inspired by, as its fleet operations manager Graham Thomas explains, a “desire to look at how we could begin to move away from diesel.” Parcel delivery company Hermes has also invested in natural gas as a way of reducing emissions generated during its first-mile operations, as have Argos, DHL and Royal Mail.

As for any alternative to diesel, rapid infrastructure development is vital to support fleet take-up. According to figures from CNG Fuels, demand for renewable biomethane compressed natural gas (Bio-CNG) has risen by 800% since 2017. In response, the company has announced £80m funding from Foresight Group to help build a network of refuelling stations across the UK.

“We expect the number of CNG trucks on UK roads to double in 2021 as fleet operators take action to support the government’s net zero targets,” said CNG Fuels chief financial officer, Baden Gowrie-Smith, of the deal. “The near-term development of more stations will enable us to serve our customers even better by delivering carbon neutral Bio-CNG nationwide. We hope this will give even more brands the confidence to switch from diesel.” 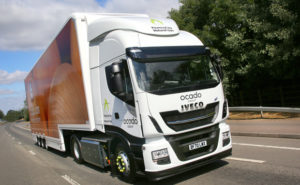 The company has already opened Europe’s largest biomethane refuelling station in Warrington, which is capable of refuelling over 1,000 HGVs per day – a figure which is almost matched by a further recent site opening in Northampton – and almost doubles the 600-a-day capacity of its stations in Leyland and Crewe. As CNG Fuels’ CEO, Phillip Fjeld explained, “We’re at a tipping point. Fleet operators are waking up to the urgency and scale of decarbonisation necessary for net zero emissions and we’re seeing demand for our fuel increase rapidly as a result.”

Fjeld’s belief is one demonstrated by figures released by Zemo Partnership last week. The organisation has stated that widespread use of high blend renewable fuels such as biomethane – and biodiesel, which we will cover in two weeks – could reduce truck emissions by 46 million tonnes over the next decade.