During March, we will be looking at the emissions-reducing alternatives to fossil fuels as the industry plays its part in the country’s ultimate net-zero ambition. This week, TNB focuses on hydrogen. 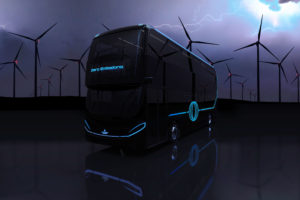 As the most common element in the universe and with a high energy density, hydrogen offers zero-emissions potential as part of a fuel cell or, as we’ll find out, an internal combustion engine powertrain. As part of a fuel cell, energy is produced electrochemically from hydrogen with the benefit of water being the only tailpipe emission. As hydrogen was used to help put man on the moon and fuel the first space shuttles, it should be no surprise that it is for the heavy duty, and coach and bus sectors where it is being explored in the greatest depth.

Although Mercedes unveiled its F-Cell Sprinter concept in 2018 and Iveco has included vans in its continued commitment to hydrogen, the fuel is garnering greater interest for larger vehicles due to packaging constraints: incorporating hydrogen fuel-cell stacks and storage tanks in addition to electric motors and associated hardware. Plus, hydrogen’s suitability for long-haul applications – tanks can be filled in minutes rather than the hours it can take to fully charge a lithium-ion battery, for example – has contributed to more widespread exploration of the technologies from within the CV sector.

The world’s first hydrogen double-deckers entered service in Aberdeen in February. Built by Wrightbus and operated by the First Group, the buses can be refuelled in under 10 minutes from the UK’s first hydrogen production and bus refuelling station, which was opened in 2015 as part of a £19m green transport demonstration project.

Companies such as Siemens Energy are seeking to address the statistic that, currently, around 95% of the world’s hydrogen supply is created from hydrocarbons. Electrolysis of water provides an eco-friendly alternative that could provide sufficient hydrogen for any future increase in demand. We will explain further in a future chapter in the series.

To provide a clearer picture of how battery electric and hydrogen fuel-cell vehicles differ, in the development of its hydrogen double-deckers, Wrightbus worked with Luxfer Gas Cylinders to create a bespoke hydrogen fuel system that, “could work to deliver the best range, in a cost-effective solution.”

The onboard hydrogen technology works in four basic steps: it is stored at the rear of the vehicle with pressure regulated to feed a fuel cell; an electric current is created by hydrogen passing along the surface of the fuel cell membrane, splitting into protons and electrons, combining with oxygen to form water; this electric energy charges an underfloor-mounted battery pack and drives an electric motor.

“We believe in creating a greener world for future generations, and we’re passionate that hydrogen is the key to safe and sustainable transport,” claimed Mark Lawday, Luxfer Gas Cylinders director. “The hydrogen economy is now taking off, but it’s an area we’ve worked in for three decades. Luxfer has pioneered hydrogen storage systems and valve technology, and we were brought into this project by Wrightbus in 2017. We’re working with a number of commercial vehicle manufacturers around the world to supply industry leading hydrogen cylinders and, in many cases, to design hydrogen fuel systems to meet the highest technological and safety requirements.” 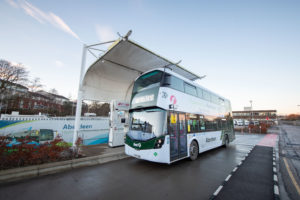 Alexander Dennis Ltd (ADL) has this week also announced that its next generation double-decker hydrogen bus will provide a zero-emissions range of up to 300 miles. Expected to be on the road by the end of 2021, H2.0 – as it is known during development – is “an integral vehicle design that perfectly balances weight and maximises passenger space.”

Helping to achieve this is a Ballard fuel cell power module that has been optimised to provide minimal fuel consumption and maximum performance for lowest cost of ownership. It also uses a Voith Electrical Drive System with regenerative braking technology and advanced thermal management, which reuses excess driveline and fuel cell heat to warm the passenger compartment.

“H2.0 is going to be a milestone for zero emission technology with unrivalled efficiency that gives a class-leading range, perfect for high mileage routes that battery technology doesn’t cover,” explained ADL president and managing director, Paul Davies. “Designed and built in Britain, our next generation hydrogen bus will retain investment in our economy and boost skills in clean vehicle technology, a crucial sector for future development as the United Kingdom targets net zero by 2050.”

The freight industry is another that can benefit from rollout of hydrogen technology. DAF and Hyundai are two of the manufacturers taking a close look at the benefits that could be brought by further development: Hyundai already has 10 of the world’s first HGVs operating across Europe and has expressed a desire to have 1,600 in operation globally by 2025. The trucks provide a 250-mile range.

DAF, which has explored the potential of the gas and held trials of its trucks in America, has stated that there are two options for utilisation of hydrogen: as a fuel-cell generating electricity to power an electric motor; or as a fuel for a conventional combustion engine.

Indeed, powertrain specialist AVL is currently developing an internal combustion engine designed for HGVs that is run on hydrogen. As the company explained, “The development project’s target is to increase both the efficiency potential of multi-port and a direct injected hydrogen engine concept for direct propulsion of a commercial vehicle with an existing standard powertrain. AVL used a 12.8 litre natural gas engine for the basis of development and set its performance target at 470 bhp.”

However, as CV interest in hydrogen increases, every solution requires considerable infrastructure investment and development.

“Infrastructure is so crucial,” Tim Harper, CEO and co-founder of Element Two told us. His company has recently announced a plan to deploy more than 800 hydrogen pumps across the UK by 2027. For context, UK H2Mobility’s figures suggest that there are only 12 hydrogen stations currently open in the UK. “We have been looking at hydrogen for a long time and everything is coming together for wider adoption, but it has always been missing the infrastructure – it’s a chicken and egg situation.” 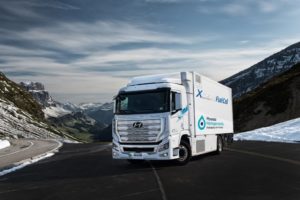 He explains that Element Two is anticipating demand from freight and high availability vehicle sectors, such as council-operated road sweepers, refuse collectors and gritters. The company also anticipates a growth in the dual-fuel market, with a diesel/hydrogen mix providing a short- to medium-term solution for cutting costs and reducing emissions. “We’re currently talking with partners on around 30 to 40 potential sites. Focus at the moment is with local councils, but as hydrogen becomes more public facing then we are very confident that demand will come.”